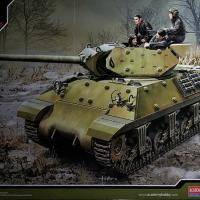 In today’s review we will be doing a Soviet Union Lend lease M10, This Tank was originally released back in 2014 for the 70th anniversary of the Normandy invasion with that being said this new release does have a few things differently such as the decal sheet and the Soviet figures.

Let’s start will the Hull, This kit does offer the interior which is very nicely detailed. Some of the fit needed some work such as the 4 Sponson containers on the sides of the tank. The diamond blade deck was a very tight fit and required some additional sanding to sit in with ought bending the deck. My only real complaint is the lack of an engine for the build. The outside of the Hull is also very nicely detailed with all the little details that are added plus the molded-in features such as the weld lines and positionable crew hatch’s.

Road wheels and suspension system, The suspension Bogie’s are very details each one had around 16 pieces including the road wheels. You get a choice between early war or late bogie/ road wheel to use on the kit which is a nice option. The bogies have a nice amount of movement in them but I recommend gluing down the bogie and road wheels to the pins as you build the model once you put the tracks on they will not stay flat on the table or on your diorama. The rubber tracks to me were kind of a disappointment I would have preferred building my own plus getting the better detail with individual links. I will be looking for a set of aftermarket ones at a later date.

The Turret of the M10 was very nice as well, the detail on the .50 cal and .30 cal machine gun( build but did not use the .30) is insane for how small these are. M7 76.2 main gun is positional when you install them as well which was nice my only issue was with the 3 piece barrel and the fit on some of the parts on the controls.

I didn’t build the Figures that come with the kit but they do not disappoint. You get a 5 person set of Soviet crew 1 driver and 4 crewmen in various poses.

The instructions were done well with the usual cover art, and then a paint color guide. It is divided up in 3 books first is the Hull and interior 2nd is primarily the turret and last is the painting guide for the figures and the hull. There are a few tiny mistakes in the instructions but nothing major.

For example on the interior portion when you are building the control levers it shows putting control arms in the wrong spot.

Decals were nice with the Soviet star, the sickle, and numbers. I didn’t use these on the tank since I was going for the box art and I couldn’t find any information online of Lend-lease Soviet tank having the emblems on the tanks.

The only thing I was unhappy about was primarily the rubber tracks which really isn’t a big deal in the end with the aftermarket parts being available. In the end, this kit was a treat to build and very detailed I ended up just using some Pigments to finish it off until for the review. I would highly recommend this to anyone to wants to build an M10 tank. Tank you IPMS USA and Academy for giving me this opportunity to build this kit.

Hull and upper hull with turret.