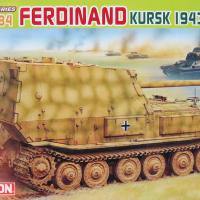 This kit is basically a slightly upgraded re-box (reboot) of their Premium Edition Kit 6317 that came out in 2008. The new parts are two photo etched tool boxes instead of one, a newly designed photo etched tool box to fit on the rear of the fighting compartment, different Magic Tracks specifically for the Kursk campaign, and a new set of decals that are supposed to allow you to build any vehicle that served with the s.Pz.Jg.Abt.653 or s.Pz.Jg.Abt.653 units at Kursk.

This is a multimedia kit comprised of 270+ styrene parts, magic tracks in the early pattern, three photo etched frets, a turned aluminum gun tube, decals, and the set of instructions that need to be reviewed very carefully before gluing any parts together. Most Dragon models today are a collection of old sprues with new sprues added to create a new kit variant, and Dragon has done so with this kit.

Step 1. This step is the assembly of the drive sprockets and road wheels. There are no problems here, other than the removal of the mold line which is noticeable on the road wheels. These road wheels are all steel rimmed, so don’t paint them a rubber color.

Step 2 & 3. These steps build the bogies. If you are careful, you can make the bogies adjustable. This is desirable when placing the model on uneven base.

Step 4. In this step the bogies are attached to the body. Make sure you put them in place according to the instructions – they are not all left side and right side, but mixed. I left off the mud cleaners (B13 & B14) at this time. The way that I mount the tracks, the mud cleaners interfere with the mounting of the idler sprocket. I will glue in the mud cleaners after the tracks are installed.

Step 5 & 6. These steps attach the wheels created in step 1. The instructions call for the installation of the idler sprockets and drive sprockets at this time. I left them off until later when I mount tracks. I also left off the drive sprocket mud cleaners (E24 x 2) until after the tracks are installed.
Step 7. This step calls for the installation of the tracks. However, I will leave them off till almost the end of the build. Below is how I built the tracks so I can weather them off the model and still install them after the body and wheels are painted.

These are Magic Tracks that require no cleanup unless you want to remove the ejector pin marks on the inner face of each track. These appear to be the proud type that will clean up with a swipe of the sanding stick or a sharp blade. These are not workable tracks, so you will need to glue them together.

The method I use to glue the tracks together is as follows:

Step 8. This step builds the rear end of the chassis and the rear plate. Here you have a choice of either the plastic tow shackles or the preformed metal ones with the metal attachment pin. There are a couple of photo etched air flow plates that are optional. You will need to bend a curve into both of these parts.

Step 9. This step continues the build of the rear plate with the air intake screen being either photo etched or plastic.

Step 10. This step builds the front armored plate with the option of the plastic tow shackles or the metal ones.

Step 12. This step adds the jack and the wood jack plate. Here you will need to decide between the photo etched clamps for the jack or the rebuild of the wooden jack plate with photo etched parts.

Step 13. This step adds the track guards in either PE or plastic. I tried the PE guards, but the design was to glue or solder the 4 major pieces together with only the end edges to hold them together. If you got past this part, then guards attach to the body with only 5 small L flanges in the middle area and nothing on the two end pieces. I gave up and went with the two plastic guards. I did cut off the plastic L flanges and used the photo etched L flanges for a little better scale presentation. I have left off until later the Notek lights (E16 & E17 x 2). These always get broken off during handling, so I add them as late as possible

Step 14. This step builds the tool box. This is a kit unto itself. To make the tools stay in place, I soldered the small U-shaped brackets into place to give them better strength. The second tool box has no interior, so it is just put together closed.

Step 15. This step builds the guns interior parts that cannot be seen if you button up the hatches. If you plan on using the metal barrel, you will have to remove the guide button on the inside of the gun housing (C13) so that metal barrel can fit into this housing. If you are careful when trapping the gun housing between the gun mounts (C14 & C15), the gun will be able to elevate and, to a limited extent, traverse when glued in to the casement in Step 16.

Step 16. This step adds the gun to the casement and the periscope is added also.

Step 17. This step adds all the hatches and other items to the roof of the casement, as well as the armored gun shield. The hatches are detailed enough to be left open, but there is not much to the interior except the gun breech.

Step 19 & 20. These steps detail the engine deck. There is no antenna included in the kit, but they do show an antenna base in place. You will have to supply your own antenna. Before you glue this in place in the next step, you should paint the interior a flat black as you can see thru the grilles and the gray plastic will show up and spoil the effect.

Step 21. In this step you add the engine deck and the casement to the hull. You also fill out the two front hatches. These hatches are detailed enough to be left open, but again, there is no actual interior depicted, so unless you get some aftermarket interiors to add you will want to close the hatches. You also have the choice of PE tow cable holders or plastic. Since the wire cable is very stiff even after trying to anneal it, I suggest that you forgo the photo etched parts for the plastic ones, as you can glue the plastic ones down and they will hold against the pull of the cable.

Step 22. This step adds the barrel, the travel lock, tow cable, and the new rear casement tool or storage box and mount. At this time, I added the tracks, drive and idler sprockets, and all the little parts that I have left off until this time. About the rear tool box – I was not able to find a picture of one in place. I was looking because, if you added this rear tool box with the top level with the casement top as shown in the instructions, the tool box would cover the rear casement door. Since this door was used for ammo resupply and as an emergency exit, my guess would be that the crew would not like to have it blocked off. If you place the rear tool box high enough to clear the rear door, it would stick up about a foot above the casement roof. The placement of this item is up to you, and if you can find any actual photos of the box in place you should use that as your guide to its placement.

The drawings found in the references listed below show the kit to be basically accurate. Since I’m not a rivet counter, I don’t go beyond that.

I found the molding to be clean, with no sink marks and few ejector pin marks on the newer sprues. The sprues from the original kit (6133) are beginning to show their age. The mold seams were easily removed and I saw no flash. Dragon makes extensive use of the pin nodes to keep ejector pin marks on the parts to a minimum. However, you will need to handle the removal and clean up of the parts with care.

As with all Dragon’s instructions, read them carefully and plan what you want to do ahead of construction. Check the fit over and over and over again to make sure that all items fit together. Also, check the number of the part being called out – or lack thereof.

The color call outs are for Testors Model Master enamel and Gunze paints. I continue to see a weakness in the painting instructions from all kit makers. Instructions for the small parts like the pioneer tools and travel lights are never listed or shown. Here you have to guess or mimic what someone else has done. There are 2 different camouflage paint schemes depicted in the instructions. The decals are by Cartograf and are up to their usual high standards. However, I chose to paint the model to represent Fgst. Nr. 150 061 of the I/656(653)rd Bttn. This was from the 4th Platoon , 3rd Coy and was eventually captured by the Soviet 129th Rifle Division near Orel.

This is a well-engineered and -molded model. If you make sure that the instructions are correct, the model goes together very well. It is a good mix of styrene and photo etch. I can recommend this kit to all WWII modelers, especially those looking for Battle of Kursk armor.