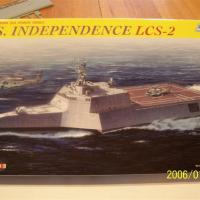 The USS Independence (LCS-2) is the second Littoral Combat Ship commissioned by the U. S. Navy, and the leader of the Independence class. She is an aluminum high speed trimaran capable of speeds in excess of 44 knots (50mph), with a range of over 4300 nautical miles at 18 knots. Commissioned on 16 Jan 2010, she has a length of 418 feet and beam of 104 feet, with a large flight deck and mission bay located beneath the flight deck. Capable of handling many types of aircraft, including the CH-53 and the V-22 Osprey, she can be configured to accomplish many different missions through the use of “mission” modules. Very cool ship!

The packaging and layout of sprues is typical of Dragon kits. Contents are packaged in clear plastic and did not display any damage. The two-piece hull has full or waterline options with a nice display stand with pedestals. One sprue is specifically for the Independence and the other is a generic weapons sprue of apparent Skywave heritage. The only parts used from the weapons sprue are for the SH-60 helicopter, which leaves a lot left over for the spares box. The upper and lower hulls fit perfectly with no gaps or warping and should not leave much, if any seam to clean up. A small P/E fret is included with safety netting and some railings. Dragon missed the mark here, as there are many more railings on the ship that are really needed to dress it up correctly. Also missing are the four 50 caliber machine guns carried on this ship. Other options include an open or closed "drive-on" ramp, weapons door, hangar doors and rear doors for launching small boats. No interior detail is provided for any of these options.

Instructions are typical of Dragon kits, with exploded drawings in a logical sequence. The paint callout numbers for the flight deck and hull are not listed in the color chart. Of the fourteen colors listed, only three are called for in the instructions. The small decal sheet appears to be complete, including the anti-skid for the foredeck.

All in all, this kit is really nice and should build up into a very nice model of a really cool ship. Stay tuned as I lay the keel and launch her!

Thanks to Dragon USA for this review kit.