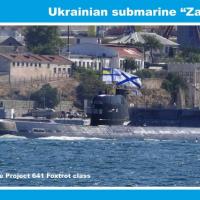 The Soviet Foxtrot class submarine, known as Project 641, was a diesel-electric powered attack submarine. First commissioned in 1971, they served until 1994 with Soviet and satellite operators. This particular boat first saw service with the Soviet Navy. When the Soviet Union broke up, this boat was in port in Ukraine. The fledgling Ukrainian Navy seized it, becoming the first, and only submarine in Ukraine service. Upon the Russian takeover of the Ukrainian State, the boat reverted to Soviet control. Interesting stuff indeed, and I still can’t pronounce the name!!

The model has been created by Ukrainian model company Mikr Mir, or Micro Mir as we English speakers would more easily recognize. Molded in two different types of plastic, with one type, the sprue with the small parts (darker plastic) being very brittle and the small parts prone to breakage. More on this later. The lighter shade which is the hull and model stand parts is softer and most resilient. There are 25 parts for the model and three for the base. A small tree of PE is included, as is a sheet of decals for five different boats. The instructions are four pages with a paint chart on one page, two pages, one side, of assembly instruction, and a page of history both on Russian and English.

The parts are well molded and contain engraved details. The engraved details are nice, crisp, and well represented. Various inlets, grates and other surface detail is present. The main deck is represented by four photo etched pieces, as are some smaller details such as prop guards, props and sail railings. Having PE Decks is a very nice addition that highlights the complexity of the decking without sacrificing detail to be lost in sanding the hulls longitudinal seams. The plastic parts did not have locating pins when joining hull and sail halves. I used care when joining these parts, and spent extra time locating where some of the smaller detail parts go. I also found that aligning the PE decks was easier when installing the escape trunks at the same time. The trunks are plastic but were very useful in getting the decks in the correct places.

The most frustrating part of the build was the brittleness of the tree of small parts. When working on the small antenna, snorkels and periscope parts that make up the top of the sail, I broke several just removing them from the tree. The main snorkel part performed a magical disappearing act that would rival anything seen on the Vegas Strip as I prepared to install it!! I cobbled a replacement together from a shape I found in my spares box. It isn’t right but strangely works. The antenna also disappeared without so much as a forwarding address, so a piece of wire became its stand in. I spent extra time repairing and replacing the broken and vanishing parts, all of which were of my own doing. There are also several PE pieces that should reside on the aft deck that look like laundry drying racks. Half of them deserted after installation and couldn’t be found by press time!! I can only surmise they defected.

Even with the difficulties I encountered while working on the project, I still had fun building and finishing the model and really like the finished product!! I chose to model my sample as a Soviet boat from the Pacific Fleet in 1982 for no other reason than it was an easy paint scheme and cool markings! I painted the model with “Tru-color” paints, which was the first time I’ve used this paint line. The Weathered Iron Oxide is a great match for the hull red on the lower surfaces. I also used their Weathered Black for the upper surfaces and their flat coat after decaling. The color coats are a semi-gloss finish, and I had to apply two coats of the flat to get the flat finish I was looking for. I chose to depict the submarine as one with no weathering except some light pastels on the decking. The model as it sits on the supplied base seemed a bit top heavy and unstable, so I attached the finished model with the base with epoxy to a scrap piece of pine, suitably finished and completed the build by adding a Soviet submariner’s badge from “Bling for Bases” to increase the visual impact.

I learned much about Soviet boats and think the completed model matches well with pictures and diagrams of Foxtrot subs I found on the internet. The completed boat is about 10 1/2" length, and scales nicely to the aforementioned resources. I recommend this kit to all modelers wanting to build an unusual Russian naval subject or just an enjoyable kit for a fun build. My thanks to Mikro Mir and IPMS/USA for supplying this sample for review.