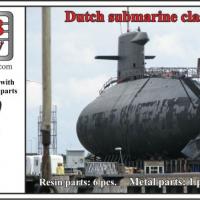 OKB Grigorov is a small model company based in Bulgaria that you may not be too familiar with. The company focuses primarily on AFVs, tanks, and naval ships in 1/72, 1/350 and 1/700 scales and they have an extensive list of products available. They produce full resin kits with photo-etch enhancements, as well as resin, photo-etch and white metal conversion pieces for other models.

The kit I reviewed is a 1/700 scale version of the Dutch Walrus class submarine. The Royal Netherlands Navy (RNN) currently operates four submarines. These submarines entered service with the RNN in 1990 and are named after sea mammals (Sea Lion, Porpoise, Dolphin, Walrus). The four boats are currently going thru an upgrade program and the picture on the cover of the model box is a photo of one of the submarines being worked on in a dry dock.

Being that this is a 1/700 scale resin kit, I didn’t expect there to be too much inside the box. That feeling was confirmed when I opened it. The part count consists of 8 resin parts attached to 4 pour stubs, and 2 small photo-etch sheets. The resin molding is very crisp with no voids, and extremely little flash. The resin parts include one part for the submarine and conning tower, and six parts for the rudders and dive planes, as well as one additional part that I believe is a new type of radar as part of the upgrade package the submarines are currently going thru. Unfortunately, the kit doesn’t come with instructions, and an internet search doesn’t really provide a clear image of what the one part is or where it goes. I believe the mystery part is seen in the photo on the cover of the box, but the majority of Walrus-class submarine photos don’t reference the part in question, and in the end, I left it off my version. The kit also includes two small sheets of photo-etch. One sheet has 2 propellers and the other consists of the base/stand for the model, more on both of these later.

As mentioned, the kit doesn’t have instructions, but the build seemed straight-forward. After looking over the pieces and the tiny sub, I decided I was going to have to build the photo-etch stand first so that I would have a way to set down the sub when I wasn’t working on it without breaking any of the tiny parts off. The base was simple to build and worked as a perfect resting place during the build and painting of the model.

Next up is dealing with the dive planes and rudders. These parts are similar in appearance, but test fitting them to the hull of the boat makes it clear which ones go where on the sub. However, I’ll give you a hint, the pour stub with the mystery cone part has the two dive planes on it. Each of the rudder parts and dive planes has very tiny attachment pins, and the hull and conning tower have pre-drilled holes where these parts attach. This is very handy and helpful because in 1/700 scale these attachment parts are tiny and extremely delicate. In an effort to better facilitate attaching these parts, I drilled the holes out a little to make sure I didn’t have to exert any more force than absolutely necessary to get everything attached. This helped immensely but didn’t completely protect me from breaking off a dive plane during construction. After some careful fitting and sanding, I was able to get the broken part back in reasonable shape.

The final detail I worked on was to add the single screw to the rear of the boat. As I mentioned, OKB Grigorov provides two of these photo-etch parts in the kit. This turned out to be very fortunate for me because while attempting to add a twist to the propeller, I broke off one of the blades. Luckily, I was able to attach the second part without destroying it.

The submarine’s hull and conning tower have etched lines representing various panels on the boat. At 1/700 scale the panel lines are way too big, but if they were in scale, they would probably be invisible. If they bother you too much, covering them with filler would be simple to do. I left them as is and in the end, don’t mind the look. I tried adding some stretched sprue to represent the antenna and periscope on the top of the conning town but decided I didn’t like these additions and removed them. The actual Walrus-class submarines have what looks like a towed sonar array attached to the upper port-side rudder on the rear of the boat, the model does not have this feature. If desired, you could add this easily enough using stretched sprue. Again, I decided to leave it off.

Since there are no instructions, there are no painting directions either. Internet searches show the submarines to be basically a black/black-grey color scheme, so that’s what I went with.

Overall, the kit goes together quickly and rather easily. I don’t normally build a lot of naval vessels, and especially not 1/700 scale vessels, but I found this to be a relatively enjoyable build. I’d recommend this kit to people who build this scale as the molding was very nice.

Adjacent to US 25 cent piece for scale
Previous Next