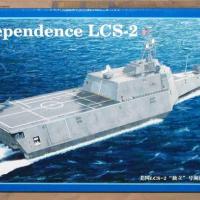 Growing up near the beach, I saw plenty of double and triple-hull sailboats. I always thought that they were so cool and fast. So then I saw photos of the triple hull USS Independence, I knew I had to have a model of this ship. It looks so cool and fast, rumors are speed capability of 50+ knots.

The kit is modeled in typical Trumpeter gray and clear and consists of seven sprues (two clear), an upper hull, lower hull and three photo-etched frets. Also included with the kit are typical twelve page Trumpeter instruction booklet, a decal sheet, and a five-view color painting and marking guide.

Looking at each of the sprues, I found that the detail was crisp with no flash. However, I did find some ejector pin markings that need to be addressed, specifically in the hanger bulkheads. If you plan to keep the hanger door closed, as I plan to, you won’t have to deal with these.

Construction begins with several miscellaneous sub-assemblies: armament, life raft container, main mast, etc. All fit together great with only one seam to deal with in the radomes. The only hitch is that none of these assemblies have an identifier to let you know when to add them during construction. However, this is not much of a problem since each assembly is easily distinguishable in their respect places in the construction.

Some of the photo-etched parts were used in the construction of the sub-assemblies. The detail of these parts, and the rest, throughout construction was excellent. I also noted that the parts seemed easier to remove from the frets. I could not determine why, it just made thing go easier.

Next is the stack assembly, which is where the greatest problem with this kit occurs. At 1/350 scale the stack openings should be just that, open. The openings are meant to be shown by painting the opening locations black. So with a few photos of the ship underway, I removed the plastic in the opening locations. Some plastic tube was trimmed to fit the interior of the stack and some spare photo-etched fret cut to fabricate grills. This easy modification provided the need depth to the stack. To avoid problems, I chose to leave off the main mast and antenna until the end instead of adding them at this time.

Construction continues with preparation of the upper hull. It is at this point that the hanger ejector pin marks will have to be dealt with. This would also be a good time to add some additional detail to the hanger structure, since there was none to speak of. One will also need to make sure that location openings are made in the hull or you will have problems later. This was followed by the attachment of the upper and lower hulls, which went together perfectly. There was no need for filler and only some minor sanding to smooth thing out. This was also the case with the bulbous bow section.

It was at this point that I headed for the spray booth. Since there was no camouflage pattern to apply (darn), painting was a snap. A coat of primer was followed by dark gray for the deck. Once sufficiently dry, the deck was masked of and the hull gray applied. For the black below the water line, special care was given to the masking to make sure the color lined up with each of the hall sections.

Breaking away from my usual building habits, I decided to use the decals for the deck markings instead of masking and painting. The first few (small ones) went down without a problem. However, the large decals gave me a lot of problems. The more I tried to get the markings straight, the worse it got. Next time, I will follow my instincts and paint the markings. However, cutting the large decals into more manageable sizes would have made things much simpler on me.

The rest of the construction deals with the deck, hull, and superstructure details (most of which comes from the photoetched frets). As with most kits, the flight deck tie downs were over-sized (measuring out to a scale diameter of almost four feet). The separate photo-etched tie-downs were definitely a nice touch. I also liked the inclusion of photo-etched ladders as opposed to the molded ones. One of the last details was the MH-60s Seahawk and drone helicopters. Here I had a little trouble with the fuselage seam on the drone. As for the Seahawk, I felt that such a new ship as slick as this one needed a little something cooler. Therefore, I borrowed a MV-22 Osprey from another kit.

In summary, this kit definitely has the “cool factor”. The simple, straightforward construction of the kit makes it recommendable to any model with a few kits under their belt. The ease of the photo-etched also makes this a great kit for those looking to get some experience with multi-media kits.

I would like to thank Trumpeter and Stevens International for providing this kit for review.

View from above starboard side
Previous Next