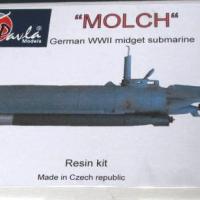 The “Molch” (German for "Salamander" or "Newt") was the first midget submarine developed by the Kriegsmarine, with the intention being a single person manned delivery vehicle for a pair of torpedoes. The first Molch was delivered on 12 June 1944, and AG Weser in Bremen would build nearly four hundred (depending on the reference, the number varies from 363 to 393). The electric propulsion system was designed for coastal operations, providing a range of 40 miles at a submerged speed of 5 knots. The complicated trim and dive controls made combat operations hazardous at best for the submariners, and the boats were later relegated to train submariners for using the follow-on, more advanced mini-subs.

Molch midget submarines were used in the Mediterranean in Operation Dragon along the French Riviera on the night of 25 to 26 September 1944 where 10 of 12 boats were lost without damaging a single Allied vessel. Between January and April 1945, Molch and Biber midget submarines tallied one hundred and two missions at the cost of seventy boats being lost, while sinking only seven small allied vessels and damaging another two.

Although this kit was released a few years ago, the folks at Pavla Models contacted the IPMS Reviewers' Corps offering their kits for review. This particular release consists of twenty-six resin parts and two clear vacuum-formed pieces. My particular sample had problems coming out of the box such as the clear parts, which should be dome shaped, being smashed down. In addition, my torpedoes had most of the fins broken off (two on one torpedo and three on the other), and I could not locate them in the zip-seal bag. The torpedoes also took a fair amount of work in order to make them look reasonably round in appearance.

On the plus side, the detail is convincingly sharp on all of the parts, although the panel lines are quite heavy. Assembly was for the most part straightforward, and although some super glue and accelerator was needed to fill gaps when joining the hull halves, once sanded, these areas looked just fine. This was only my third all-resin kit, but separating the parts from their mold stubs was easy enough, and the attachment points did not interfere with fitting the parts. The directions are easy enough to follow, and with the limited parts count, it is not too difficult of a build.

There are a couple of instances where the builder must supply his or her own parts, as in step B, where you need to make your own windows for the conning tower, and step E where you supply the control wire for the dive plane. From the research that I did while building this kit, I did find that Pavla has done a good job in capturing the essence of the Molch, and even with the heavy panel lines, it looks just like the real thing. Painting directions call for light grey paint overall, which I took to mean RAL 7001, so I used the Model Master equivalent (per my references Flint Gray, FS 36314).

As I mentioned previously, construction was not too challenging, aside from the torpedoes. Once I had the “fish” reasonably rounded, I had to deal with the missing fins. I started cutting some new ones from sheet plastic. Then by chance (or sheer luck), I found that the White Ensign Models German torpedoes set that I purchased to use with another project actually had two sets of fins included in photo-etched brass. I opted to use the type 7A fins for this project, even though the 7E were probably the ones I should have gone with for historical accuracy, but those are for my other project (and the reason that I had the torpedoes in the first place). If I were building this kit for a contest, I would likely replace the kit-supplied torpedoes with ones from White Ensign Models, or another aftermarket offering.

For my hits of this kit, it certainly is an unusual subject, and 1/72 scale seems ideal to represent it, as the submarine was not much longer than the length of a torpedo. Interior detail is reasonable, although it is next to impossible to see once the conning tower is installed. The small items all fit in place with minimal assistance being needed. Attachment points on the pour stubs were in places that mostly allowed for easy clean-up, with minimal potential to damage the parts.

As far as my misses are concerned, I have said enough about the torpedoes, and as I mentioned, my sample had the dome-shaped clear pieces pushed downward, which required careful manipulation to push back out without poking through the thin plastic. I am also surprised that no clear film is provided for the conning tower windows and that a small piece of wire was not included for the dive plane. I have also mentioned the panel lines that are very predominate, but a person could fill them if they so chose.

Overall, I would still recommend this kit to folks wanting to add a unique World War 2 midget submarine to their collection.

I would like to thank the folks at Pavla for providing this review kit to the IPMS, to the Reviewers' Corps for allowing me to perform this evaluation, and to you for taking the time to read it.