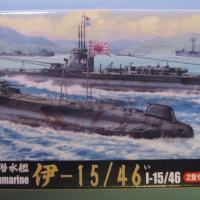 If you are looking for something to build quickly, which I find relaxing after a particularly challenging build, you may want to consider this recent release from Fujimi.

Late last year, Fujimi re-released this combination kit of the I-15 and I-46 submarines, so I jumped on the opportunity to build these two boats once again, but with roughly twenty years of advancement in my modeling skills. The fits are good overall, making this a fun kit for both beginners and more experienced modelers with an interest in 1/700 scale WWII subjects.

I-15 was the first of twenty submarines to be built as part of the B-1 class, and was designed to carry a single Yokosuka E14Y1 (code named Glen) observation floatplane. I-15 was completed at the Kure Navy Yard on 30 September 1940, and she would take part in the attack on Pearl Harbor the following year. Later in December 1941, I-15 would travel to the Farallon Islands (north of San Francisco), but the decision to shell the city on Christmas was postponed, and later scrapped due to concerns of retaliation for striking populous civilian areas. I-15 would have its career ended on 10 November 1942, being sunk by depth charges after being spotted by the USS Southard (DMS-10) near San Cristobal.

I-15 was 356.5 feet long, 30.5 feet at the beam, with a draught of 16.1 feet displacing 3655 tons. The boat had a range of just over 16,000 nautical miles, and could travel at speeds of up to 8 knots surfaced, and 23 knots while submerged. The boat mounted a single 140mm cannon for surface fighting as well as a double 25mm anti-aircraft gun, and contained six 533mm torpedo tubes (all located in the bow). Depending on the information source, the crew size was either 91 or 94 officers and men.

I-46 was the first of three submarines of the C-2 class, and was designed to carry two midget submarines. I-46 was completed at the Sasebo navy Yard on 29 February 1944, and had the misfortune of colliding with RO-46 during her shakedown cruise in April, which damaged the conning tower. The boat had a single patrol, being sent to Leyte in October 1944 as part of the defense of the Philippines, she would be sunk by months end, likely by the depth charge attacks of the USS Helm (DD-388) and USS Gridley (DD-380).

As stated up front, this is a quick model to build and consists of two sprues of dark grey, smooth plastic that is rather brittle. I-15 requires the use of twenty-three parts, and I-46 utilizes only eighteen. I found a small amount of flash on the parts, which is not unexpected with the use of older molds. There are no decals included, so it is expected that the hull identification numbers and aircraft markings be hand painted by the modeler. In my sample, one of the parts numbered 26 was not fully formed, but was easily remedied with plastic strip. In the course of construction, I managed to break I-15’s antenna mast (part 1) and I-46’s periscope (one of the items on part 25), both items I replaced with wire. I have since broken the I-15 periscope during transport to a model group meeting. Directions for assembling both submarines are on one side of a single sheet of paper, and are done through black and white line drawings, while the other side of the sheet contains instructions and cautions typical for most kits.

Painting was relatively simple with Tamiya TS-66 (Kure Arsenal Grey) being decanted and airbrushed over the hulls, then Vallejo German Camouflage Brown being used on the deck, followed by a coat of Flo-Stain Teak. The cut off for the waterline hull was painted Tamiya Hull Red. The nose of the mini submarines is Model Master Acryl Aircraft Interior Black, and the Glen is Tamiya IJN Grey and Dark Green.

I mentioned that I built this kit several years ago, so to spruce things up; I started by adding a propeller to the Glen by cutting a Gold Medal Models 4-bladed propeller down to a two-bladed one. I also added some antenna lines by using black synthetic hair. Fellow modeler and reviewer Keith Gervasi is a friend of mine that brought the hair to one of our group meetings (his wife is a beautician), and handed out samples. I knew immediately that I wanted to try it out on this project. I also pilfered the “meatball” insignias from another 1/700 scale kit rather than attempting to paint them by hand.

As far as my hits are concerned, as I mentioned up front, this is a relatively easy build, so most modelers could build this kit in a single weekend (maybe faster). The finished submarines are good representations of the I-15 and I-46 in a manageable scale for modelers with limited display space. Fits were good, so tricky fits or areas requiring a lot of touch-up will not frustrate modelers with limited experience.

For my misses, I would have liked Fujimi to include decals for both the submarine hull numbers as well as for the aircraft, as this would make construction even easier. I personally did not care for the brittleness of the plastic used in this release, which led me to replacing some items with wire when they broke off.

Overall, I would highly recommend this kit to modelers wanting to add these two submarines, or submarines of the B-1 or C-2 class to their collection. Most modelers will have little difficulty assembling the kit, and advanced modelers can add the details they desire as well. It was nice to see this item re-issued, allowing me a chance to relive the fun of a simple build, while employing some advancements as well.

I would like to thank the folks at Dragon Models USA for providing this kit to the IPMS-USA Review Corps for assessment, and to Dave Morrissette for leading the Review Corps, and allowing me to perform this review. I would also send out kudos to all of the folks behind the scenes at the Review Corps who help Dave with his efforts, and as always, my sincere appreciation goes out to all the folks who take the time to read my comments.

I-15 Starboard Close Up

I-46 Starboard Close Up

I-46 Stern
Previous Next