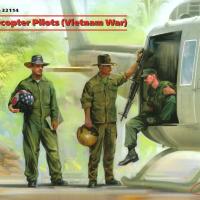 Figures from the Vietnam War are few and far between, especially helicopter crew. With the ICM release of the 1/32nd scale AH-1G they have released a kit of THREE Vietnam helicopter crewmembers.

Packed inside a typical sturdy box are three plastic sprue of light grey plastic that features the parts for the three figures. Two of the sprues are the same with both APH-5 and SPH-4 helmets, mic booms and ear cups. This is a nice feature because the helmets can be used without the figures to spruce up any model. The plastic is very crisp and the figures, especially the faces, are very well done. The assembly and paint instructions are printed on high quality paper with color callouts in ICMs paint range, as well as, Revell and Tamiya.

Figure one is a crew chief sitting on the wing of the Cobra or in the doorway of a Huey. He is molded in seven parts. He is posed as having a conversation with one of the other figures. He has a jungle fatigues and soft hat. Posed with a thumbs up he is quite a likeable and lifelike pose.

Figure two is a standing figure with a Cavalry Stetson, holding an APH-5 or SPH-4 flight helmet, your choice. He consists of nine parts. He has a one-piece flight suit that was developed during Vietnam. They were not very popular with the flight crews, but a version continued to be used well into the 1990s. The one-piece flight suit was used for a longtime, however this particular style and collar was used in Vietnam and immediately after. Eventually the lapels were rounded by the 1980s. Interestingly, they were replaced by the ABDU two-piece flight suit. The one-piece flight suit in the 1980s was sage green, a very unique color. The Vietnam era one was slightly ‘greener’ but I’m not sure of the exact color.

The third and final figure is another pilot figure in a two-piece Nomex flight suit. These were olive in color. These were the preferred flight suits of the day because you could remove the top when hot and remove the bottoms without getting completely underdressed to do natures calling. This figure is standing and holding a helmet loosely in his hand, as well as, having his Stetson on his head. Very Vietnam.

Assembly is easy enough with a great fit throughout. There is plenty of detail on these pilots and I think under a coat of paint that mine came out pretty well, especially considering I don’t paint figures very often. I used just a touch of filler here and there, mostly where I was careless removing the part from the sprue. A coat of primer and they were ready for paint. I used a variety of paints on mine and finished them with artist oils.

This set is really nice. It is plastic so the faces may not be quite as crisp as a resin, but I think they are great and paint up nicely. I like that you can use the figures on any type of Vietnam and after helicopter. It is about time we have some accurate figures to pose with our helicopters. I posed mine on an ICM Cobra and they look great. I enjoyed building and painting them. I need to do more figures. They were fun and they look great next to the model. What more can you ask for from a figure kit? Great job ICM. I can’t wait to see what’s next.

Thanks to ICM and IPMS/USA for the review example. You can obtain yours from you local hobby shop or online retailer.