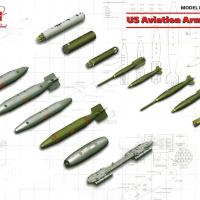 With the recent release of many Vietnam era aircraft such as the B-26K, OV-10A and the OV-2 it was inevitable that you would want a variety of armament slung underneath these aircraft, particularly the B-26K. Well, ICM is providing you with plenty of options.

Packaged in a very sturdy cardboard box with a cover, the box contains two of each of two sprues for a total of four sprues. My set was perfectly formed with no blemishes anywhere. The box also contains clear and concise instructions printed on high quality paper. They are printed on a large single sheet folded in half making up four A4 pages. An inventory is on the cover, the actual instructions on the inside two pages and finally the decal placement and painting instructions are on the back. Paint call outs are for ICM, Revell and Tamiya.

A sheet of decals is included that are very thin and very easy to read, even in 1/48th scale. My decals performed flawlessly as long as you put them on a surface with lots of water. They are very thin, did I mention that they are very thin? They are opaque though and the carrier film literally disappears, even on the natural metal pieces. Amazing decals.

There are a lot of choices in there. You can make two of everything. Here is what is included.

It isn’t all rosy however. While you get two Mk-81 and two Mk-82 bombs you only two of each type of tail fin, standard and high drag, and you only get four regular fuzes and four delay fuses. You can only do two of each bomb with regular fuzes and two with extended fuses. You decide which you want. It would have been nice to provide enough tail fins along with standard and delay fuzes to cover all eight bombs. That way you could have gotten a good loadout. If you want four Mk-81s with delayed fuses you can do it but you have to have one with the high drag tailcone. And if you do that you can’t build up the Mk-82s with standard fuses because you’d be all out. It is just annoying. If I were to do it again, I would put all the standard fuzes on the high drag bombs and left the delayed fuzes for the standard tail fins.

That said all the parts build up nicely with no filler required anywhere, except where I screwed up taking the parts off the sprue. Once all the parts were assembled it was off to the paint booth. This happened really fast.

Most parts were painted in Alclad Aluminum. The bombs were painted Tamiya Khaki. I painted my MER Tamiya NATO Black because it will eventually end up on my B-26 and it has a black belly. ICM wants you to paint the flares green but my research, thanks to Hyperscale, showed them to be aluminum with white stripes and a brown stripe on top of that, along with the tail portion. That was easy enough to do with tape and paint. I did add some white stencil decals to the flares as they are seen on the real thing. These particular decals are not included in the kit. All the other armament has the appropriate markings on the decal sheet.

The Zuni rockets were fun to paint. I started off with AK Extreme Brass. The tip was masked off and then the rockets were painted the appropriate Green. Then the aft portion was masked off at the point where the curve starts and then painted NATO Black. I could have gone one better and applied the yellow stripe decal, but I liked the way they looked at this point.

All the bombs and rocket pods were painted with Alclad Klear Flat.

I added my flares to the MER and everything was completed.

This was a fun exercise in building something simple for my B-26K. This set will expand what I can put on my B-26K. The lack of tail fins and fuses makes this set essential for your Counter Invader, if you want to expand the loadout. Don’t be limited to the B-26K, these armament options can be used on any of the ICM Vietnam era kits, such as the O-2 and OV-10. They can also be used on A-1s and any of the Vietnam era Air Force jets. I, in particular, loved the finished look of the Zuni rocket pods but all of the options are really nice. They are a nice addition to any model where they would be appropriate.

Thanks to ICM and IPMS/USA for the review copy. You can obtain yours in the US from Stevens International at https://www.stevenshobby.com/ or your local hobby shop or online retailer.

US Aviation Armt SUU-14A
Previous Next