Ukrainian Soldier with NLAW and AK-74MN 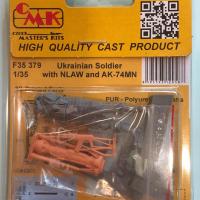 As I sit writing this review, the invasion of Ukraine has been ongoing for approaching seven months, and the Ukrainian forces are currently making gains in their eastern territory against their invaders. This recent and timely release from the folks at CMK was kindly provided to the IPMS USA at the Nationals this year in Omaha, Nebraska. Consisting of polyurethane and 3D printed parts, along with a small decal sheet, this is a relatively easy build that nearly any modeler can enjoy. If you are looking for a symbolic kit of a current conflict, I would highly recommend this offering.

As this kit contains a single figure and weapons, the packaging is simple, but thoroughly adequate for the task. Upon opening the packaging, you will find four parts cast in polyurethane, four parts that are 3D printed, and a decal sheet with six individual decals. The figure is constructed from the polyurethane parts consisting of the torso and legs, two arms, and a head, which all attached using a medium CA glue without issue. The NLAW, its scope, and I believe post as well as the AK-74MN are 3D printed and attached just fine with a medium CA glue.

I started my build by attaching the arms to the rest of the figure by loosely placing the NLAW in location to get the angles correct. This allowed for separate painting of the figure and weapons, then attaching the NLAW and AK at the end. The challenge of this build was figuring out how to represent the digital camouflage of the uniform in 1/35 scale. This absolutely delayed me for a while until I found a video showing a technique using packing foam (like the stuff included in Eduard Brassin items) to apply the paint.

For the figure I used Vallejo Buff as the base then applied the camouflage colors consisting of Vallejo Highlight Germ.I (Feldgrau) and Green Gray, Ammo by Mig Yellow Green, and AK Tenebrous Grey. After the base color was dry, I used pieces of the packing material (torn off, but approximately 1/8-inch in any dimension) held in a pair of locking tweezers to apply each of the additional colors. I then used Vallejo Olive Grey for the ammo storage vest and helmet cover. The NLAW was painted with Tamiya Lacquer Olive Drab and Stynylrez Black, and this black was also used on the AK-74 (along with Tamiya Lacquer Gun Metal) and boots. My advice is to pick a reference photo and go with it as there are plenty of options available with the uniform, ammo vest, and helmet and goggle covers as well as the boots. The small amount of exposed face was painted with the Andrea Flesh Set and touched with Tamiya Figure Accent Color.

As far as my hits are concerned, the castings are beautiful in this kit, and I am amazed at the level of detail that can be created with 3D printing as it evolves. There were no fit issues during the construction, and the decals settled with Micro Set and Micro Sol.

While not really misses, I would have personally liked some color suggestions in the instructions, and a little more clarity on the location of the printed part 2 (NLAW post).

With all this being said, I can highly recommend this figure to anyone wanting to add a modern soldier to their collection. Anyone who has worked with resin should find no issues in assembling this figure.

I would like to thank the folks at Special Hobby for being gracious enough to provide this kit to the IPMS-USA for review! A special thanks to Phil Peterson for obtaining this during the Nationals and bringing it to the Review Corps get together. As always, I also appreciate the folks behind the scenes in the Review Corps who keep the review machine running so well, and finally my most sincere appreciation to all who take the time to read this.