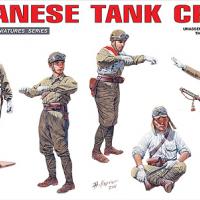 One of my 2012 New Year’s resolutions was to build and paint a figure to go with each of my 1/35th scale armor models, thus providing a scale reference with which the casual viewer could judge the actual size of the armor model. So, when IPMS/USA offered up this set of Japanese tank crewmen for review, I jumped at the opportunity to build my first plastic figures. However, I chickened out on actually trying to paint the figures, fearing that my very first painting job would do the figures a disservice. Instead I built the figures straight from the box, primed them in a light gray primer, and then gave them a wash of dark brown oil paint to pick out the details.

This MiniArt set comprises five WW2 Japanese figures in various animated poses. Japanese figures are rarely produced by the major injection molded figure makers, at least when compared to the large numbers of WW2 German and US figures available on the market. This set comes in a simple end-opening cardboard box, said box offering the modeler an assembly guide on one side and a painting guide on the other side. The figures themselves come on two sprues of dark gray plastic, together with an additional rudimentary instruction sheet. There are no decals or photo etched parts as I have seen included in other figure sets to provide rank insignia or medals, etc. At least, according to the painting diagrams, Japanese tankers didn’t wear unit or rank insignia on their uniforms, and unlike German soldiers, didn’t wear their medals on a day-to-day basis.

The plastic used by MiniArt for these figures is the same as they use for their regular armor model kits, and thus can be glued together and painted using standard modelers’ glue and paint. As mentioned, these figures were assembled directly out of the box, and you can see they went together quite well – with one exception. One of the figures has a small “hole” in his gut which you can easily fill, but I chose to leave the hole intact to show the figure unadulterated.

Each of the five figures is well-posed, and the poses all appear to me to be most useful and natural for anyone wanting to incorporate figures into their modeling program. Each comes in multiple parts: separate legs, main torso, separate arms, and a separate head. While the heads come with molded-on helmet straps, the helmets are separate pieces. Also separately molded are gun holsters and swords/knives. All the parts are well-detailed, and the fabric effect on the figures is nicely executed. The one disappointment for me is the facial features. They are only average when compared to other figures I have seen in the same medium (injection plastic), and unfortunately most of the faces don’t look particularly Japanese to me. I also feel that, on a couple of the figures, the noses are too wide. However, there is always an alternative with injection figures, in that a number of firms make very high quality replacement resin heads. My favorite in this regard is Hornet Figures. And, as luck would have it, Hornet makes one set of Japanese replacement heads. However, the MiniArt heads in this set are okay, if only average, compared to the rest of the figures’ parts, which are nicely done.

Overall, then, and especially given the scarcity of WW2 Japanese figures in injection plastic, I can recommend the MiniArt Japanese Tank Crew set to anyone looking to populate his models with appropriately dressed and posed figures.

I would like to offer my sincere thanks to Model Rectifier Corporation for providing IPMS/ USA with this review sample., and IPMS for allowing me to review it.