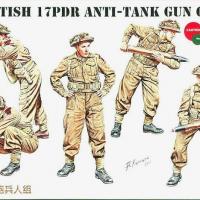 This set consists of 5 figures, all conducting loading and firing of the 17 pdr AT Gun. The figures come on two sprues with 48 parts. The box art and instructions on the back of the box show the figures as completed. The first figure is watching what is going on, the second is the observer using a pair of binoculars, the third is holding a ready round, the fourth is ready to load the gun, and the fifth is the crew member aiming the gun. The poses are well done and depict a reasonable amount of action.

The set had very minimal flash and no ejection pin marks. What mold lines that were there were easily removed with a sharp blade. There is a good note here on the decals – the arm badges and rank stripes are included. The only name on the sheet is Bronco, but they look good and are in register. They are a little thick and I had to use a lot of Solvaset to get them down into the folds of the cloth. The painting instructions are just for the major items. You will need to copy what you see in the illustration or consult your references for actual colors for the badges, shoulder boards, and metals. The paint colors are coded for Gunze Sangyo, Tamiya, Humbrol, and Mr. Color.

If you are one of the figure builders/painters who subscribe to the concept of “if it is a plastic head, replace it with a resin one,” then you might want to do so with some of this set. The facial expressions are well done, but seem almost identical. However, the figure aiming the gun has a very well done face with one eye closed. The commander using the binoculars has an open mouth shouting some instructions.

I constructed the figures using liquid glue. This softened the plastic enough that, as pressure is applied to the joint, some dissolved plastic will ooze out and, after hardening, any excess can be cut or sanded away. I used very little filler. The fit was acceptable and little adjustment was required to get the proper poses.

There is a sprue with a lot of extra crew equipment, but none of them are called out in the instructions, so you can add whatever you want.

This set is a mini diorama waiting for you to create a gun in action. However, I could not get the sitting figure to fit to either the 25 pdr gun or the 17/25 pdr Pheasant. I’m not sure which model it will fit on, but you may have to do some surgery to get it to fit on other, but similar, kits. The photos depict the figures handling ready rounds; however, they are not supplied with the kit. You could get kit number AB3535 if you need some ammo to display. Don’t let my figure painting deter you from this set; it is much better than what I painted.

Thanks to Dragon Models USA for the sample and IPMS/USA for the opportunity to review it.

Group side
Previous Next