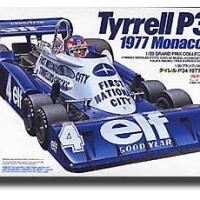 Back in 1976 Ken Tyrrell ran a Formula One Race team. He employed an innovative car designer named Derek Gardner. Up to this point in Formula One or Grand Prix as it is called, many designers tried some pretty radical designs in the hopes of gaining an advantage over the other competitors. Mr. Gardner came up with one of the wildest designs and it worked. This was the Tyrrell Project 34 six wheeled car. He felt that by reducing the drag on the front end the car would have an advantage in front line speed. By doing this he put four small (10") wheels on the front thereby reducing the drag and still keeping the grip. This car ran for 30 races between 1976 and 1979 and achieved a win in the process at the Swedish Gran Prix.

Because the governing bodies in this form of racing felt that the six wheels gave the Tyrrell P-34 and advantage it was banned at the end of 1977. Tamiya have produced a very fine model of this exotic car in 1/20 scale. As per their standard, there are many parts and loads of detail.

To begin with, there is a model of the Ford Cosworth DFV V-8 engine. This is a work of art in itself. I had no trouble building this masterpiece and only wish that they would sell all of the various engines that come with the kits. There was one tricky part of the engine build and that was the exhausts. It is best to dry fit the parts first then spot tack them before you glue them in place. Build only one side at a time or else you can get into real trouble mixing up the parts. Follow the instructions carefully on this phase as the numbering is very important. I loved the spark plug wiring on this as it comes with the kit. I wish that they had included the fuel lines for the fuel injection as the injectors are quite obvious when installed.

The next tricky part is the front suspension. There are a lot of parts on this and they are very small. CA glue comes in handy on some of the parts as they come unglued with liquid cement due to a lot of handling to get the fit right. Once they are done, they look terrific.

I next tackled the seat and seat belts. Tamiya gives you the material for the seat belts and they only have to be cut to the proper width. The instructions do not specify the length but they could always be shortened if they are too long. Better to be too long than too short. The buckles are very small and the belt material needs to be threaded thru the buckle parts. This took awhile and at times I felt like I was trying to do these wearing boxing gloves. They finally came out and look perfect.

The cockpit surround comes in two parts. It's best to get this filled in nicely as it will be very obvious if it isn't. Of note are the little windows that were in the cockpit surround so that the driver could see the tiny wheels on the front. Derek Gardner put a lot of thought into this design. The wheels are a nice fit as they lock on the axels with tiny rubber washers.

The rear wing is a masterpiece in itself. There are two styles of wings on this kit. One is the basic five piece wing with the support struts. The second wing is all photoetched with many parts plus a photoetched support. I didn't use this one as it looked like too much work.

Throughout this kit there are photoetched parts that duplicate those molded in. I really can't see this reasoning as the molded in part must be removed before the photoetched part can be installed and in my mind this leaves more room for error.

Tamiya includes a driver to fit into the car if one choses. If the driver is used, the seatbelts do not have to be installed as they are molded onto the driver's suit.

Overall, I loved this kit. I may buy another to build without the mistakes I made on this one. One problem I did have did not concern the kit itself and that was when my compressor died and I had to apply the Future Floor Wax by Q-tip. This didn't work out to my expectations.

For painting, I used Duplicolor Automotive Lacquer. I love this stuff. It stinks but goes on nicely and dries like now. I mixed a dark blue and white to get what I thought was the right blue. I turned out a little too dark but without the use of my compressor and airbrush, I left it as it was. I consulted some of my reference books and found the right blue and it turned out to be Model Master Blue Angel Blue. The darker blue I used could be used on later Tyrrells.

Would I recommend this kit? You bet. I loved it and look forwards to doing more from Tamiya. Now I just wish they would put out a Ferrari 156 Sharknose and a Lotus 49.

I want to thank Tamiya for giving IPMS the kit to review.