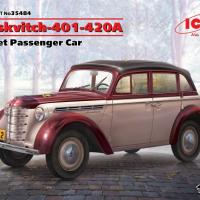 You have to give the former Soviet Union credit – they didn’t waste time coming up with something new IF something available would do the trick. They did it with the U.S. B-29 bomber (Tupelov Tu-4) and they didn’t with this series of post-war sedans – making a carbon copy of Germany’s Opel Kadett from 1946 on.

ICM has previously made a closed-top four-door sedan version of this lovely little vehicle, and now offer the somewhat rarer convertible version. The kit offers a couple of options – open or closed convertible top and free spare tire or encased spare tire. It comes with a detailed engine and drive train and a truly exceptional level of detail in the interior. It also comes with all the parts to make the standard sedan if you desperately want to go in that direction. Being the kind of modeler I am, I chose to do mine with the open top so I could show off all the lovely inside workings.

However (and this is my fault, not the kit) I made some terrible decisions in the course of the build that turned this thing into something of a monster. Wanting to go the two-tone style, which is quite attractive, I thought I could just build the chassis/fender combination separate from the body and airbrush each portion in their appropriate colors before fixing them together – rather like you might build a standard two-tone car model in the usual 1/24th scale. The body itself was in multiple parts that I had to fit together rather like a jigsaw – definitely not the instruction sequence. What I hadn’t counted on was the EXTREMELY tight tolerances of the various parts – such that when time came to fit the body on to the chassis, it simply wouldn’t go. No amount of cajoling made the slightest difference, and I finally had to break apart my carefully painted jigsaw and try and fit the various bits onto the chassis separately. What I’m saying is that this model does NOT assemble like a car model. It assembles like a very well-made tank model. For the most part, you’re far better off assembling it in the instructional sequence offered instead of what I tried to do. To add insult to injury, I cut out a door panel, as the kit doesn’t offer opening doors, and promptly lost this bit to the carpet monster. What hangs on the kit in the pictures is a crude copy I made, although you can’t really tell unless you look closely.

As a consequence of all this I had to, of course, scrap the airbrush job and paint the two-tone scheme completely by hand. Surprisingly, it STILL came out looking pretty good if I do say so myself, which is more of a testament to the kit than to my modeling skills.

So are there any obvious problems with the kit itself? Not really. If you pay attention and don’t get cocky it cooks up into a really nice replica of this vehicle with a level of detail the 1/24th scale crowd can only dream of. I plan on using another ICM figure kit of Soviet Leaders to create a lovely little scenario with Kruschev and perhaps one or two of his ministers on a typical 1950’s Moscow street.