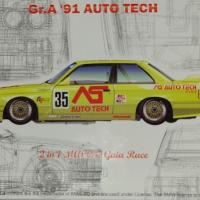 The version I chose was the car driven by R. Ratzenburger at the 1991 Macau Guia race. The kit is very nice parts which are easy to work with and finely detailed. The parts are cleanly molded and require little cleanup. The PE parts were pretty straight forward however I had to use the decals for the harness. The instructions were easy to read and follow, however the colors are in Japanese. But fear not as they are listed in English on the box. The tires were already sanded so you don’t have to rub off the seam. Another great feature were the decals. These are the best I've ever worked with.

I painted the body with Rust-Oleum 2 part yellow using three coats. It was Finished off with a no name 3 part clear coat from spraygunner.com. which was great stuff.

Well there you go. I recommend this kit. It's box stock and has no motor. But wait there's more. It has an opening hood so an aftermarket motor will work. Have fun with this kit.

Thanks to Platz and IPMS/USA for the review kit.