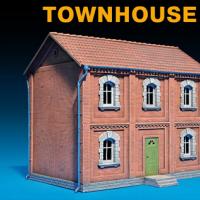 The kit is cleanly molded in 154 pieces of multi-colored plastic. These parts are the same parts used in constructing many of the other 1/72 offerings from MiniArt. No flash is apparent and detail is very crisp on all parts. A new part that I have not seen on this model was the introduction of a stone foundation.

Assembly of this kit was straight forward as all of the offerings before it. However, I took a different approach. On many of the other kits, I found that doing each wall with the end connectors tended to produce minor gaps at the corners. This time I decided to pre-build the corner assemblies and then add the walls. Also, I decided to paint parts separately before assembly. This approach offered a much cleaner look to the house, a departure from the worn down structures I had built in the past. The result was by far my favorite work of all of these kits I had done.

I was completely satisfied, as always. This kit was one of the better ones I had done from this line. I would highly suggest not only this kit, but a departure from the assembly instructions as mentioned before. This will produce a building with a much cleaner appearance. As always, thanks to MRC / MiniArt and IPMS USA for the opportunity to review this kit.