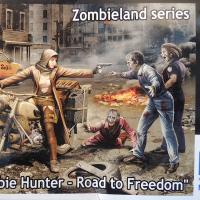 Master Box has ventured into the post-apocalyptic world with Zombie Hunter – Road to Freedom. Dick M. was glad to get rid of this kit as it frightened the rest of the kits in his stash. Scared the bejeebers out of my mail lady when she dropped it off and the zombies came hissing and scratching out of the box. The kit is described as part of the Zombieland Series, so there may be more undead where these came from.

The box art scene depicts a fair maiden defending herself from an onslaught of four zombies. One of the undead is a female police officer that has gone outside the law, one guy in coveralls with mouth tentacles, one bedraggled looking guy, and one female medical person crawling along the ground. Our fair heroine is well-armed and carries numerous supplies on her path to freedom from the hungry human corpses. She’s shown riding a motorcycle, which is not included with the kit. Master Box shows several motorcycles that can be used with the zombie kit on the back of the box.

The kit includes several accessories for our intrepid zombie hunter, including additional gas cans, knapsack, duffel bag, ammo pack, bedroll, rifle slung over her back, and two additional pistols. The knapsack, ammo pack, and G.I. cans are all nicely molded.

The parts are crisply molded with nice detail, but there are mold seams that will need to be dealt with.

The heads for the undead do not appear to be much different than the living. The heads could conceivably be used for figures other than zombies. The former police lady has an open wound on her arm.

The fair lady’s motorcycle shown on the box top art is not included with the kit. I am using a MiniArt US WWII motorcycle WLA for this review.

Some surgery was required under the lady’s butt to get her to sit on the saddle seat for the WLA motorcycle. She is wearing a leather-looking trench coat with long tails that are molded separately from the rest of the torso. The tails also required some tailoring to fit the torso and drape around each side of the motorcycle. Her arms and legs need to be fit to the bike. Some of these modifications will probably be required with each of the different motorcycle kit options.

The figure parts fit together very well with only minor filling or scraping required for a perfect fit at the shoulders and waist. The arms and legs fit together well to replicate to the poses shown on the box art. The poses and posture for the figures are very nice, at least for dead people. The female medical dead person ended up being a nose sitter so she'll need to be fastened down to avoid doing a face plant. All of the figures are able to stand nicely on their feet.

I painted the figures with a mixture of Vallejo and Tamiya acrylics. The poor guy with the mouth tentacles has an otherwise normal looking face, considering the parasite living inside of him. The other zombies were easy to paint because when I do figures they look dead anyway.

This is a nice change of pace figure set by Master Box and I enjoyed building & painting the figures. Thanks to Master Box for furnishing the review sample and two IPMS for allowing me to review the kit.