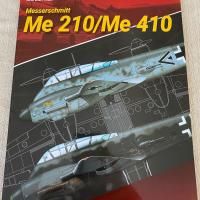 The Messerschmitt Me-210/410 is one of a lesser aircraft in the Luftwaffe legacy. The aircraft was designed in the late 1930’s with the hopes of it being a multi-use aircraft filling in as a Fighter, Bomber and Reconnaissance platform. The aircraft began as the Me-210, but due to various technical and design problems, it became the Me-410 due to the major modifications to remedy the shortcomings it had. In essence was an entirely new aircraft. There are two surviving examples, one is with the Smithsonian Air and Space Museum and awaiting restoration, and the other is on display at Royal Air Force Museum Cosford.

The Topdrawings book from Kagero is a 10 page book with a very brief history of the aircraft itself that is provided in both English and Polish. The drawings comprise of the various Me-210 and Me-410 3 view drawings and cross sections represented in 1/72 and 1/48 scale. They also include comparison line drawing between the two aircraft so the reader can actually see the external differences between them.

Most of the line drawings are of side profiles with expanded close up drawings of distinguishing aircraft features. In the center of the book there are period black and white reference photographs and color profiles of two Me-410’s.

With Kagero books they typically include bonus items such as vinyl masks or decal sheets. With this publishing they included 2 large double sided 3 view line drawing posters. Special attention with these drawings includes armament/cockpit layout as well as a comparison between the Me-210 and the Me-410. These posters are super enlarged drawings that are included in the book itself.

I enjoyed this book and would like to thank Casemate Publishers for supplying IPMS Reviewer Corps for this copy.