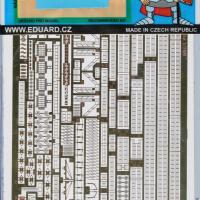 Most important to understand is that this set is engineered for the 1/700 Revell Tirpitz kit. The railings in particular precisely match the length and folding pattern of each segment. Pay attention to folding the railings since they have pre-set fold notches for both port and starboard sides that will precisely fit their location. This is a big plus over standard PE railing because corners have stanchions unevenly spaced just like the real ship, something very difficult to address with evenly spaced generic railings. In other words, railing chins do not turn a sharp corner in mid-air without stanchion support – this PE set has them figured out for you. Other pieces will work fine for other Tirpitz kits and other DKM warships. However, railings did not work as well on other Tirpitz model kits (Aoshima, Dragon, H-P Models, Pitroad/Skywave, ROP o.s., Trumpeter). I tried out the lengths (before folding) on unbuilt Aoshima and Dragon Tirpitz kits, and some of the railing pieces did not quite fit well. Also note that Eduard’s Bismarck photoetch set (Eduard #17037) differs from the Tirpitz set, although there is some overlap.

The pieces are close to 1/700 scale and finely detailed with embossed surfaces on some parts. According to references, these photoetch parts look accurate. They are superior to plastic kit pieces, and add many parts not on the original kit. They are specific for DKM Tirpitz only, and only the Revell 05099 kit, which has been out for five years. Parts are for Tirpitz in 1942 and later appearance, but quad 20mm AA guns are not included. Brass gun barrels for 15 inch, 5.9 inch, 4.1 inch and 37mm mounts are also not included, but are available from other sources. Therefore, for a 1944 fit, additional AA guns are necessary to compliment the photoetch parts from the Eduard set. Otherwise very complete. Nothing for the underwater hull is supplied.

The instructions are a masterpiece – I wish other photoetch set instructions would be as detailed. Eight pages of color diagrams clearly illustrate what photoetch parts go where, or replace what. Also indicated are times that plastic rods are needed to complete the PE parts.

Normally, Eduard’s PE set for Tirpitz is intended to be used while building the model. However, I built Revell’s 05099 DKM Tirpitz model OOB (out-of-box) in 2010 as a review. Adding PE to an already built 1/700 warship is more difficult than adding them as you build and paint the kit, which will not color my review. I imagine that retrofitting built models with photoetch sets is common so this review should be helpful for any modelers of the Revell Tirpitz without existing PE.

When constructed OOB and painted, this kit looks fine for a 1943 fit. Model Master and Tamiya acrylics were used in keeping with safe painting practices. Overall, I liked this kit for its sufficient detail, 20-page instructions, sensible building sequence and accurate dimensions for 1/700 scale. But there were some warts – no swastikas were supplied on flags or for deck decals, and there were unsightly seams to fill with rod and strip between superstructure decks. The Arado Ar196 floatplanes were clunky and there were no blast bags for the main and secondary turrets. It is a full hull without waterline option, something I dislike, and I have longed for an opportunity to convert this kit into a waterline version. Now I have my chance!

As usual, I washed the fret in warm water with detergent before use. Both sides of the fret were airbrushed in the most common light base color – Master Models Hellgrau 50 (Light Gray). Next up was to prep the finished model for taking photoetch parts. First I cut the underwater hull off and sanded the hull edges, using the embossed boot top lines as a guide. I did not put a bottom plate on in order to grip the model better during PE assembly. Then I identified and removed the kit parts that were to be replaced, which is where good instructions come in handy. A Dremel with very small metal burrs was used to remove the deck items such as cable reels, and for sanding down the remnants of pulling off kit parts. Other parts were removed as per instructions at each step when needed. All the single 20mm mounts were pulled out since this PE set has single 20mm mounts; however, it would look foolish not to replace the kit quad 20mm Vierling mounts and twin 37mm mounts. I pulled these out too and replaced them with almost an entire PE set from Eduard (Eduard 17020 German AA Weapons WWII) that I had on hand. Eduard’s DKM AA PE set is also excellent quality and not too difficult to fold and assemble even with very tiny sections.

There are 9 large cable reels, and 12 small. Instructions call for plastic rod to fill the reels. Instead, I used a Micro Miter to cut 1.5 mm pieces off a wood stick that was 2 mm in diameter, and these looked great in the large cable reels. For the small cable reels, I cut 1.5 mm diameter pieces from Russian olive tree branchlets. Hint: if you use plastic rod instead of wood, paint the ends too with Tamiya XF-52 Brown, because these reels have open sides like the real things. Cable reels folded and fit together very well and are vastly superior (and larger) than the molded-on kit pieces. There were 22 cable reels on the kit (9 large and 11 small), but all but one of each type mysteriously disappeared from my hobby desk. Spent days looking for them but finally gave up and replaced the missing reels with an older Lion Roar set (#700008). Cable reels from each PE set looked similar and were far superior to the kit pieces.

For the main turrets, Parts #88 & 92 (for the front face) fit turret B fine, but A, C & D turrets do not have a flat face. Sand down the ridges outside the barrels and parts #88 & 92 fit and look fine. Need to sand off the molded-on turret ladders and rangefinder port covers. Parts #93 (turret ladders) are in two separate locations on the fret – upper right corner and lower middle – so do not fret if you only find 4 sets. Take care putting on rangefinder covers #89, 90 to properly align the hatch hinges. All of the Eduard turret parts would also work for old Aoshima and new Dragon kit turrets.

As usual, I added PE pieces to the midline first, then worked out to the sides. This is especially important when the kit is already built, but less so when building. The railings were a joy to install. With pre-notched fold lines, they hugged every corner and were the exact length needed. Just be careful with the numbering and which is port or starboard. This feature alone makes the PE set worth its cost. I sanded the disattachment points with regular sanding sticks, and the PE pieces were tough enough to handle an be sanded – another big plus. The small cranes on the stack were a little tricky to bend into place, but would be easier during the building process. The plates covering the crow’s nest on the mainmast did not cover the sides completely, and left small gaps. Otherwise I enjoyed the normally tedious and grueling installment of 1/700 PE pieces with this set. Adding Eduard PE parts after the kit was built was not difficult, except for matching paint (and I used the same paint bottles as the original build). Of course, this would not be an issue if the PE parts were added during building the kit.

Eduard 17038 PE parts really superdetail the Revell Tirpitz kit, and are very welcome. Also, most of these parts would work fine on other manufacturers’ Bismarck and Tirpitz kits – but be careful with railings. Do not let the Revell specificity deter you form using this PE set on other Tirpitz kits. The pre-set folds for railings are superb.

At $32, the value is decent – you get a lot of finely detailed pieces that are easy to use and fit well. The goal of superdetailing Revell’s Tirpitz kit is met – almost. Applicability to other manufacturer’s kits is a plus.

Recommended for serious superdetailers, advanced modelers and 1/700 warship nuts mostly because excellent and accurate replacement parts are for a single model kit of a single ship. Many parts can be used on other DKM warships.

Thanks to Eduard for the photoetch set and IPMSUSA for publishing this review.

Completed Tripits with (top) and without PE