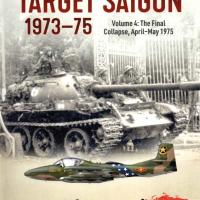 A Brief Introduction of this Book

This book contains 86 pages, including 130 black & white photographs, 34 color pages of colored profile drawings and eight maps. The color drawings illustrate several vehicles (primarily those of the PVAN (People’s Army of Vietnam) with a few US tanks and aircraft). Almost all of the photographs serve to illustrate the futility of the war in Southeast Asia.

In this final book of the Asia@War series, the author explains further, operational aspects of the Vietnam war, ending with the total collapse of the Saigon government. The battles that took place throughout the Mekong Delta, the Central Highlands and finally in and around the capitol city of Saigon, reflected well on the efforts of the ARVN forces, most notably the VNN (Vietnamese Navy of South Vietnam) and the VNAF (Air Force of South Vietnam).

Once again, it is important to note the United States had withdrawn almost all military and financial aid from the Saigon government, though a huge stock of weapons and ammunition were left for South Vietnamese government.

As we withdrew our final contingents of U.S. military, civil servants and civilian contractors, there was a palpable sense of failure throughout the Saigon area. It also provided a pattern which was repeated during the evacuation of Kabul Afghanistan in August of 2021. The president of South Vietnam, Nguyen Van Thieu, to reorganize the military zones and to consolidate his efforts along the coast and eventually the capitol Saigon, proved to be disastrous and ineffective. The resulting combat saw urban street fighting, with heavy losses for both the ARVN and especially the PAVN forces.

I was saddened to learn about the number of officers and enlisted men who chose to kill themselves (and in other reports, executed) rather than face the final loss. Some of the most disturbing images are those illustrating the destroyed or abandoned armor and equipment around Saigon. The North Vietnamese use of ‘re-education’ camps was also cover along with the imprisonment of some officers until 1992. On the reverse was the fact that President Thieu resigned, initially fleeing to Taiwan and eventually to the and the Boston area

The author discusses the generally held belief that the South Vietnamese and forces were a weak and incompetent institution, while ARVN military actions were largely successful and could have prevailed save the dramatic loss of US aid and support. He stresses the fact that the final combat was not the rout offered by the western press.

The final conflict and evacuation during Operation Frequent Wind concludes this sad commentary and the end to our Vietnamese experiment which cost over 58,000 US deaths, over 303,000 wounded, South Vietnamese loses of approximately 254,000 killed, wounded of over 1,170,000 wounded and approximately 430,000 civilians killed. The numbers of North Vietnamese and Viet Cong losses were even higher. Though the author points to the many poor military command decisions in his concluding remarks, I expect the totality of our losses across the conflict has a numbing effect for me. Added to these loss numbers is the fact that this small nation of North Vietnam had largely humiliated the U.S. and in fact wound up as the victor both politically and militarily.

I highly recommend this book covering one of the final phases of our Viet Nam war. It is an excellent and important read and, in my opinion, add a significant amount of information and insight the next to the final combat operations of the Vietnam war. Mr. Gandolini’s book is very graphic in his photo images lays out his story in an easily followed and orderly manner.

I want to thank both the provider Casemate, publishers Helion & Co., and IPMS-USA for the opportunity to review this book.