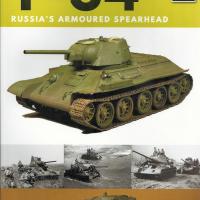 Pen and Sword has started a new series of publications related to Armored Fighting Vehicles (TankCraft Series) and this book is the fifth installment in the series. It covers one of the best WWII-era tanks: The Soviet T-34.

The book is broken down in the following chapters.

The first 3 chapters tell the story of the T-34, going back to the origins of the design in the Christie Tank and its design evolution, culminating on the 3rd chapter where the tank is described from the mechanical, defensive, offensive and even living conditions point of view.

The next 3 chapters (Camouflage, Model Showcase and Modelling Products) are certainly devoted to the modeler. It includes 7 color artwork profiles, in some cases with an accompanying picture which was used as the base for the artwork. The model showcase section has 5 outstanding finished models. Please note that these are finished model and not “work in progress” chapters. It is more of a “Gallery” type chapter. There is a brief description of which model was used and some details on how it was finished, but these chapters are not “how to” nor reviews of the kits. The last chapter of this grouping covers different kits, their markings and a description of any extra detail parts (photoetch, turned metal barrels, etc) included in the box. I cannot tell if the list of kits is exhaustive (the T-34 has been boxed by many manufacturers and in many scales) but certainly it is very complete list of model kits.

The final 3 chapters cover the combat history of the T-34, starting during the Barbarossa days -when the training and tactics were far from ideal-, to the introduction of the definitive version of the T-34: the /85. The combat chapters describe tactical use of the T-34 against other armored vehicles, troops and even how it was haunted from the air by the Luftwaffe. The final chapter briefly describes the combat service in the Middle East and Eastern Europe all the way to the 90s. These chapters include descriptions of some individual combat situations including a handful of firsthand accounts, however most of the description is generic and focused on tactical use the of T-34.

This book but it has a good balance of history, details, modelling resources, drawings, artwork and period pictures proving to be a very useful resource for any modeler, armor aficionado and/or history buff.

I would like to thank Pen and Sword, Casemate and IPMS/USA for the review sample.