T-34 On The Battlefield Volume 2 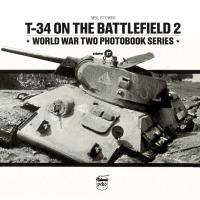 Neil Stokes is a noted Soviet armor enthusiast and this is at least his third photobook in this series, with prior books covering the Su-76; KV; along with the Su-85 and Su-100 on the Battlefield. He has also authored KV: Technical History & Variants; a 560 page beast published in 2010 by Airconnection. Neil is an active member of AMPS (Armor Modeling & Preservation Society) and you can find him on www.amps-armor.org .

This latest installment in the World War II Photobook series follows up on Volume 1 by Peter Kocsis, published in 2013. The four page Introduction is in both Hungarian and English provides a summary of the development and operational usage of the Soviet T-34. Featuring primarily unpublished photographs from private collections, each photograph is on its own glossy page with dual language captioning. If you happen to be looking for Volume 1, although it has been out of print, it would appear that it will make another appearance in 2019.

The T-34 is a Soviet medium tank that had a profound and lasting effect on the field of tank design. At its introduction, the T-34 possessed an unprecedented combination of firepower, mobility, protection and ruggedness. Its 76.2 mm high-velocity gun provided a substantial increase in firepower over any of its contemporaries; its well-sloped armor was difficult to penetrate by most contemporary anti-tank weapons. When it was first encountered in 1941, German general Paul Ludwig Ewald von Kleist called it "the finest tank in the world” and Heinz Guderian affirmed the T-34's "vast superiority" over existing German armor of the period. Despite a relatively high production cost, the T-34 was manufactured in higher numbers than any other WWII era tank. The T-34 was exported to many countries post war and some variants have remained in service in nearly a dozen countries. Indeed, the T-34/85 variant was in front line service with Yemen government forces in 2015.

The front cover depicts a STZ T-34 in a roadside ditch sporting a F-34 gun manufactured by Stalingrad’s Barrikady Gun Factory. The rear cover shows a T-34/85 that has taken a massive hit that destroyed the rear of the tank. I counted 99 black and white photographs printed on glossy pages. There is not really a Table of Contents. After the Acknowledgements and Introduction, this book goes straight to the captioned photographs. The Peko books website has a selection of some of the photographs at https://pekobooks.com/books/t-34-on-the-battlefield-2/ and you can find some of the pages below.

There are plenty of great photos, but one that caught my attention is depicted on Page 53. It is a Factory 112 T-34 in winter that has the remnants of whitewash. I found the combination of the well-worn whitewash compared to the snow that is packed on to the road wheels, tracks, and a side panel quite striking. The periscope covers on the driver’s hatch are raised showing some nice detail. Neil also points out the armor plating that was added to the upper hull to protect the turret race.

Neil Stokes has assembled some excellent photographs on the T-34 that can provide the inspiration for some great weathering and diorama ideas. I would say this is a quick read, but then a photograph is worth a 1,000 words, correct? My thanks to Casemate and Peko Publishing along with IPMS/USA for the chance to review this great book.