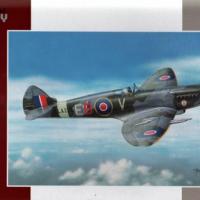 The Spitfire is probably one of the most-modeled kits in 1/72 or any other scale, for that matter. It was used in many different modifications and variations, and a few are still flying today. It combined the classic beauty of a thoroughbred with the performance of a champion, and remained in production well after the end of World War II even though the original prototype first flew in 1936.

The F. Mk. 21 was powered by the upgraded 2,050 hp. Rolls Royce Griffon 61 engine turning a five bladed propeller, and was developed from the Mk. IV and Mk. XX Griffin-powered prototypes during 1944. The aircraft featured a protracted development period due to stability and other aerodynamic problems. The aircraft also featured a redesigned wing, and although production models first appeared in February, 1944, the type was basically too late to see combat during World War II, although No. 91 Squadron, based on the west coast of England, was reportedly equipped with them at the end of the war. Postwar, the type served with several squadrons based in the UK and occupied Germany, and later the type was used in Royal Auxiliary Air Force units until being phased out in the early 1950’s.

To my limited knowledge, this is the first mainstream kit that has been issued of this particular Mark, although I’m sure that there have been some limited run issues of the Mk. 21. Consisting of over 120 pieces molded in light grey styrene, plus a clear plastic section with windows and other clear parts, the kit contains many extra parts including several Seafire rudders, hinting to us that Special Hobby will be issuing kits of other Spitfire/Seafire variants before long. It even has a counter-rotating prop, which would be useful on other Spitfire and Seafire conversions.

Basically, the moldings are excellently done, and you’ll have to take care to separate the used parts from those that will be left over, as this can cause some confusion since there are a LOT of extras. Detail is recessed, and nothing seems to be overdone. There is minimal flash, but it will need to be trimmed. One good feature of the kit is the cockpit and wheel well detail, which is as good – if not better – than any other Spitfire kit I have done in this scale. The cockpit door is molded separately, so the canopy can be displayed in the open position, allowing a good view of the detailed cockpit. One feature I wasn’t particularly impressed with was the five-bladed prop, which was molded with individual blades and a two-piece spinner. These seem to be standard with some of these Eastern European kits, and I don’t see why they couldn’t just cast the prop with blades attached and the spinner parts separately. The prop was tricky to attach and align, but it is possible provided you have enough patience and nasty words in your vocabulary.

The kit instructions are very complete and include a detailed sprue diagram, excellent assembly drawings, and drawings of four different versions, plus a stencil location diagram. The stencil diagram was especially useful, as we are finding out that RAF aircraft have equally as many maintenance markings as Luftwaffe types, and these are in English so we can tell what they are. There were a couple of decals not mentioned on the instructions, but most will be used.

Although the moldings of this kit are good, I found some problems in the wing-to-fuselage fit, which required some filler and trimming to get it right. It’s not an insurmountable problem for an experienced modeler, but for the novice it could prove frustrating. The tailplanes are tab-fitted into the rear fuselage, and are easy to align once the wings are attached to the fuselage.

The windshield and windows go on fairly well, although the rear window is weak and broke apart when I was trying to install it. I glued it back together with no further problems. The exhaust stacks are particularly nice, and they could even be drilled out if you are particularly masochistic. The insides of the cowling receptacles for them, however, need to be enlarged slightly or they won’t fit. There is no radio mast, but a VHF whip antenna can be installed aft of the cockpit, and this is clearly shown on the drawings. There are a LOT of small detail parts on this model; I, no doubt, omitted a few.

Paint schemes and decals are provided for four aircraft., including LA226, EB-B, of No. 41 Sqdn. RAF, Germany, 1945; LA328, RAG-J, of No. 600 (City of London) Sqdn., RAuxAF, Biggin Hill, 1946; LA195, RAV-E, of No. 615 Sqdn. (RAuxAF), Biggin Hill, 1946; and LA267, JX-L, of No. 1 Sqdn., RAF Hutton Cranswick, in 1945-1946. All have similar camouflage patterns and markings: medium sea grey underneath and ocean grey and dark green topsides. Yellow wing leading edges are common to all versions, and other markings are in sky or red. Painting is similar to most 1/72 scale models, and with masking tape, all things are possible. The decals are thin, easy to work with, and need no trimming, although care must be taken with the long walkway lines. After drying, the decals can be oversprayed with Glosscote and Dullcote, giving a very realistic finish.

I didn’t have a Spitfire of this Mark before, so this was a welcome addition to my Spitfire model collection. It is accurate, detailed, and a relatively easy model to build. Although I would recommend to novices to wait until they have more experience, it is a good kit that any modeler with some experience can build without undue effort. Have a go at this one. Recommended.

Thanks to IPMS and Special Hobby/MPM for the review sample.