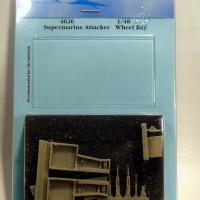 The Supermarine Attacker was a British single-seat naval jet fighter originally developed as one of several jets to replace the RAF’s piston powered aircraft. It turned out to be no better than the RAF’s existing Meteor or Vampire and the RAF rejected it. Supermarine modified the Attacker for shipboard servicer and offered it to the Royal Navy who accepted it. The Attacker has the distinction of being the first jet fighter to enter operational service with the Fleet Air Arm. Its career with the Fleet Air Arm was brief. Introduced in July 1951, it was retired in 1954. Several factors contributed to its early retirement not the least of which were problems caused by its tail-wheel undercarriage configuration.

Aires has created a resin wheel bay upgrade set for the Trumpeter Attacker F.1. The set of four casting blocks comes well protected in a sturdy bubble pack with foam backing. There are a total of 16 parts on the four blocks. Included are the main gear wheel wells and doors, actuator rods, the tail gear wheel well with wheel strut. The parts are all cast in a medium-gray resin with exquisite details and no casting flaws. CAUTION! The main gear door actuators are very small and are attached to the pour block with the smallest amount of material. As you can see in the parts photograph two of the actuators are missing, never to be seen again. The remaining parts are easily removed from their pour blocks with little effort, but the smaller parts will break very easily without a good measure of gentleness.

The resin main wheel wells and tail wheel well are direct replacements for the kit’s wheel wells. There are two resin actuator rods on the main struts that replace the kit’s actuator rods. All other main strut parts are kit parts. The kit’s main landing gear struts fit quite well in the resin locating holes. The kit wheel bays are rather simple while the Aires replacement includes wiring and hydraulic components. It may be difficult to see in the photographs, but the rivet detail in the Aires set is superior to the kit’s rendition

This set of Aires parts will add a great deal more detail to the underside of the Attacker with no more work involved than using the kit parts. Due to the small and brittle nature of a few of the parts I would recommend this set of replacements be used by the more experienced modelers.

Thanks again to Aires for supplying this item for review and to IPMS/USA for allowing me to do it.