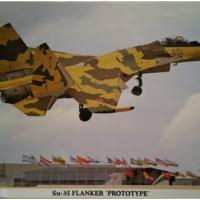 First shown to the public in 2007 the Su-35 has been under development since 2005. The Russians have classified the Su-35 as a “fourth ++ generation” fighter. Essentially the Su-35 is an upgraded version of the Su-27. One of the most noticeable upgrades being the Su-35 having thrust vectoring nozzles.

There are roughly 299 parts in the kit however some of them aren’t used. There are 15 total sprues, one of which is a stand for the model, and there are 3 duplicate sprues. The decals provided allow making either the 901 or 902 prototype version plane. There are a lot of options selecting armament for the plane, which makes that step fun. This is a re-boxed kit with a change of decals so there isn’t a major upgrade in any of the tooling. The fuselage comes in two halves and they fit together really nicely. The panel lines are scribed and some will need to be put back in when you sand down edges, but most of it looks deep enough that it shouldn’t be too much of an issue.

The first step is assembly of the cockpit. I opted not to put decals on the panels as there were already details in the cockpit. Prior to performing step 2 you will need to punch holes in the wings if you decide to put armament on the plane. There are also holes that require punching on the top as well to place pitot tubes and other sensors on the 902 version.

Following that step the halves are placed together with the cockpit. As mentioned previously these pieces fit together really nice. There was hardly any sanding needed and I didn’t need any putty to fill gaps. I was extremely impressed with the build of the fuselage.

The next step is the pilot and ejector seat. I opted not to put a pilot in this plane. Just personal preference but the pilot is a standard 4 piece figure. This step also includes attaching the nose cone to the plane; this fit well but could have used a little bit better sanding on my part. If you’re going with version 901 you will need to cut off the tip of the cone to allow for the tube in the later steps.

The next two steps are the air intake assemblies. There are options to have the intakes open or closed, I chose closed, and I would also suggest painting the insides prior to assembly. This was the only part of the model I had to really focus on the seam lines as they were pretty visible. I worked to get them to disappear, not knowing later I would cover them up. You also need to punch holes in them if you are considering putting on armament.

Next is the exhaust, with the option to pitch the nozzles down to show the thrust vector effect or do them in the normal position. I chose the down position because I thought it would be a nice touch (I also adjusted the horizontal stabilizers to make it look more realistic as well). The instructions also depict how the position of the nozzles should look when you use the thrust vectoring pair. This was really the only area I had any type of fit issue. My nozzles did not go on flush and as this was my last step I was stuck with having nozzles that didn’t look flush as everything had already been finished.

The following step is placement of fins and small piece parts on the wings and fuselage, nothing terribly exciting. Following that is the landing gear. This section was extremely straightforward except for the paint call out. They call out to use paint 73 on the landing gear. Unfortunately they don’t specify what paint 73 is. As I don’t have access to Mr. Color paint I had to use my Model Master and Tamiya paints in its place. From the pictures I could find it seemed like the landing gear was a neutral gray like color, so I used that. The wheels are also done in this step and I was surprised how well the wheels flushed together after gluing. The nicest part about it is that the interior of the wheels are separate and you place them in after. It makes it really easy to paint them separate and glue them together so they look nice.

Next are the vertical and horizontal stabilizers, as mentioned previously I placed the horizontal ones angled down so that it would correlate with the thrust vectoring. Next is the final step of body construction, the canopy. Here is where the last differences between the 901 and 902 come into choice. You also have the option to have a closed or open canopy. The closed canopy fits fairly well, it probably could have used a little more sanding from my part but I was happy with it.

Here is the fun part, the armament. There are a total of 12 pylons to place a variety of missiles, with only the ends being the ones that don’t have an option. The different types of payload are as follows: R-27R, R-27ET both medium to long range air to air missiles, R-77 radar homing air to air missile, R-73 short range air to air missile, Kh-31 air to surface missile, KAB1500 1500 kg class bomb, and the B-8 which are rockets carried in pods. Not all missiles belong on every pylon but there is a great chart of what can be put where. There is a note that you cannot put any missiles on the middle rack under the plane if you choose to put the plane on the stand, as the stand won’t be able to connect to the hole. I initially planned on putting one on every pylon but decided to not put any in the middle of the plane to allow the plane to sit on the stand.

The last part before painting is putting the stand together or putting in the plug for the stand if you decide not to use it.

I found painting the plane to be difficult but the most fun and it also took the longest. I initially painted the engines both top and bottom, then went back and painted the underbelly gray (FS36375). Next was the top yellow and I couldn’t find Mr. Color paints so I instead mixed the Testors yellow (2/3) with Model Master’s sandgelb (2088 1/3), that gave me a color I was happy with. I then went back and taped up the plane and lightly took my x-acto knife and cut out the patterns. This was the tricky part as I had to teach myself to not cut too deeply or I’d ruin the paint underneath. I went back and painted the brown/red first, which I used Tamiya XF-9 Hull Red, then I did the green, using Field Green (FS34097). I was overall happy with how the colors came out even if they weren’t exact. But there was a lot of re-spraying and a lot of running so I had to do a lot of fixing.

The decals didn’t sit as well as I had hoped but I was also pleased with those. Having never built a jet in 72nd scale it was very interesting to see how small the decals were in comparison. Notably some weren’t that much different in size, but it did make them a little more difficult to work with. Some went on just fine and look very flat, others didn’t go on as well but that may very well have been the modeler.

Overall I loved this kit, this kit is probably the best fitting kit I’ve ever had the privilege of making. I would highly recommend this kit to anyone. Someone with a little more elbow grease than me could make this into a big winner at shows. The only issue I came across was in instructions on the paint number missing but I’m sure Mr. Color has that logged somewhere. I could have found it if I wanted to.

Thanks to Hobbico and IPMS/USA for providing this copy and the opportunity to take a look at their model of this nicely designed kit.

Right side of aricraft