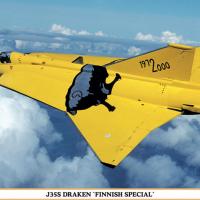 The Hasegawa quarter-inch scale Draken kit has been around for several years now, released in the markings of all of the European countries that flew it, including a number of special anniversary schemes for Swedish, Danish, and Austrian aircraft to commemorate the aircraft’s decades of service. This kit provides decals for the Finnish anniversary scheme to highlight the aircraft’s 28 years with Finland’s Ilmavoimat.

The kit itself is a relatively simple and easy build, with a fairly low parts count compared to many Hasegawa kits. One of the nicer aspects of this “special” kit is that, with the exception of decals and weapons, all the parts are included to build a Finnish Draken at any time of its service with the Finnish Air Force. That includes extra antenna, optional gun ports for dual cannon-armed aircraft, parts for late model aircraft with rear fuselage flare dispensers, and an optional chin mounted IR seeker.

The cockpit builds up into a very convincing miniature version of the real thing. The cockpit colors were changed from green to grey during the aircraft’s career. I chose to forgo the yellow and black end-of-service anniversary colors of the aircraft’s final flights in the year 2000 to model an operational 1977 aircraft from the second batch received from Sweden. Therefore, a green cockpit was called for. Aries makes a nice replacement, but with the canopy buttoned up, the kit cockpit, highlighted with a little dry brushing, a few Airscale instrument decals and some tape seatbelts, was perfectly adequate.

I did remember to put some weight in the nose, and the remainder of the build was easy enough. There were only a couple of spots where the fit required some extra work, noticeably on the upper half of the nose-to-fuselage joint and at the rear of the spine, both areas requiring thin shims to fill the gaps. I also managed to lose one of the wingtip parts and had to fashion one from plastic card stock (of course, the wayward part wandered home several days after the build was completed). Although parts are included for the IR seeker, I had to guesstimate the placement since it’s not indicated on the instructions and since this anniversary aircraft was one that didn’t carry it (and then I went and tweezer-launched the clear tip and had to fabricate a replacement from the spares box). The same goes for the under-fuselage drop tank pylons. The tanks and pylons are provided, but the holes for them aren’t opened on the fuselage. Finding a downloadable image of the original Draken kit instructions is very helpful for this. Fortunately, this isn’t an issue with the missile pylons or the small wing fences.

The model was painted with ModelMaster enamels. Topside, I used Olive Green and Sea Blue, both lightened somewhat with light gray. Looking back, I’d probably darken the Olive Green more, as every image I’ve seen of Finnish Drakens shows considerably less contrast between the topside colors that what I’ve painted. The underside was colored with Light Gull Gray (with a couple of drops of blue tint). The natural metal areas were sprayed with a few different shades of Alclad. The small, breakable protruding parts were then added, as were a pair of AIM-9B sidewinders from the spares box. Throughout their career, operational Finnish Drakens received minimal markings. I particularly wanted to model this Draken with the large national insignia roundel and white numerals seen early in the aircraft’s career (these were later modified to much smaller diameter roundels and black serial numbers). GalDecal offers a couple of Finnish decal sets, each covering several aircraft spanning the history of the Finnish Air Force. These provided the majority of the markings for the model, the remainder – the 11 Sqd. Bull insignia in particular – coming from the kit decals. Painting and decals was done in my now standard Paint-Future-Decal-Future-Dullcoat sequence. Time consuming, I know, but it works for me.

All in all, a fairly painless, stress free build, enabling me to add this unique fighter to my growing Finnish Air Force collection. Thanks to IPMS and Hobbico for providing this model for review.