Strike From the Air: The Early Years of the Us Air Forces 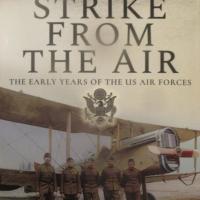 This book covers the aeronautical activities of Americans in the military from the beginnings in the American War Between The States (Civil War) to the end of World War I. Actually, balloons were used by both Union and Confederate forces during that war, and there was some balloon activity up through the end of World War I. After the Wright Brothers made their first flight in 1903, experiments were conducted by Americans to develop military aircraft, although after the Wrights showed the Europeans how to build a practical and controllable airplane, more progress was made in Europe, so that by the time the United States became involved in the war, the British, French, and Germans were far ahead of us in military aviation technology. The U.S. had used a few airplanes in Mexico before our involvement in Europe, but not with great success.

The book covers American technological progress during this time period, and describes American involvement in the European war in great detail, naming many of the people involved, including well known historical figures as Billy Mitchell, Frank Luke, Eddie Rickenbacker, Raoul Lufbery, James Doolittle, and many others. Accounts of U.S. involvement in some of the major battles are given in dramatic detail, and even the subsequent actions of the American pilots of the Kosciuszko Squadron in the war in which the Russian communists attempted to expand their empire westward into Poland.

The book makes for some very interesting reading. There are photos of many of the people involved, and some of the airplanes, although there are no color drawings which would be very useful for modelers. At the end, the author provides accounts of many of the stories of Americans who were shot down and captured by enemy forces, mostly their own accounts, and shows how they survived imprisonment and how some managed to escape.

This is a very worthwhile history of this time period, one that has been largely ignored by historians up to this point. It is worth getting. Highly recommended.

Thanks to Pen and Sword and Phil Peterson for the review copy.