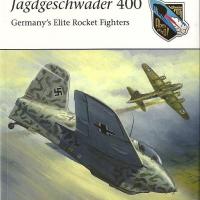 A very interesting feature of the book is that includes ample pilot debriefing reports of combat missions, both from the Luftwaffe as well as from the USAAF or RAF whenever possible, as to have information from both the pilots that flew the Komet and the pilot that faced them off.

The book has plenty of black and white pictures of different aircraft and their pilots, which will be very valuable for modelers looking for reference pictures. This book is recommended to aviation historians and modelers alike.

By reading the book is clear that the Komet had a larger impact in the Allied Air Forces as a psychological weapon than as a military weapon. As with most revolutionary technologies employed by the Luftwaffe in the closing months of World War II was “too little, too late”. But the impression left in those airmen that faced the Komet would last decades.

I would like to thank Osprey Publishing andf IPMS/USA for the review sample.