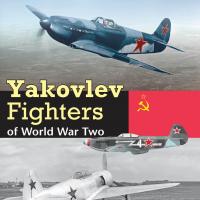 This book is the comprehensive history of the fighters produced by the Yakolev Design Bureau during World War Two. The Yak-1 first flew in 1940 under the designation I-26, changing to the now familiar Yak-1 when production began at the end of that year. The authors trace the development of these designs and offer the reader a comprehensive history from drawing board to final use. Ever wonder why the Yak-3 was actually produced after the Yak-9? It is all here.

The book is divided into 9 chapters. Chapter one is comprised of 58 pages and deals with the design, development and use of the Yak1. This begins with the I-26 initial variant and the loss and death of Yakolev’s chief test pilot Yulian Piontkovsky. Each variant and weapons system is covered.

Chapter two covers the I-28, I-30 and heavy fighter projects. These 14 pages deal with some prototypes and dead-end Yakolev developments

Chapter three is 58 pages dedicated to the Yak-7 fighter and trainer version. What started out as a fighter trainer eventually evolved into a very good fighter. The fighter version had all equipment removed from the rear cockpit. The canopy for the Yak-7 fighter was replaced with a hinged plywood fairing, and equipment suitable for a fighter installed. This aircraft is most interesting as it is a fighter that evolved from a trainer when it is usually the other way around.

Chapter 4 is the next 76 pages and covers the Yak-9. The Yak-9 was a development of the Yak-7 and had many improvements based on combat experience with the Yak-1 and 7. Yak-9 production saw a much wider use of duralumin throughout the airframe.

The 46 pages of Chapter 5 are devoted to the ultimate Yak fighter, the Yak-3. Encompassing all that had been learned from the Yaks 1, 7 and 9 this was the final and best of the World War two Yaks. From its baptism of fire in the summer of ’44 until the end of the war and beyond, it gave mother Russia outstanding service.

Chapter six is a 48 page combat history of all the Yak fighters. A good discussion is found on the approach Soviet Command took with their air wings, and here is where you will find many beautiful color profiles of many of the combat aces.

Chapter seven covers all foreign users of the Yakolev fighters. From Albania to France, to post-war China; evaluation aircraft captured by the Germans; and post-war evaluations by the UK and USA. There is also discussion of postwar communist bloc use of these fighters.

The last two chapters totaling 21 pages detail all original surviving Yaks in museums around the world, and the new build warbirds. These new Yaks were produced by the Yakolev factory, and the 20 or so new aircraft that were constructed continued the serial numbers from the last production Yak-3. Differing mostly in power plant (the new ones use an Allison V-12) and propeller (a Hamilton Standard), each of the new aircraft is discussed.

This is a very good book! It is a well researched, in-depth study of the WWII Yaks. The authors have produced the ultimate book on these aircraft and no modeler, aircraft historian, WWII historian, or VVS historian should be without it. I can heartily recommend this book to all! In modeling, these types are well represented with kits in 1/48 from Accurate Miniatures, Eduard, ICM, Modelsvit and ARK, to name a few. In 1/72 they are available from companies such as Mastercraft, Airfix, Amodel, Hobby Boss, Heller, ICM and Valom.