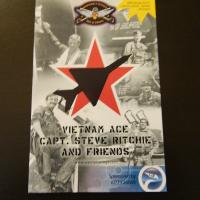 IPMS/USA recognizes one of our own, Floyd Werner, for providing this sheet set for review and I personally applaud our reviewer corps leadership, John Noack and Phil Peterson, for sending them to me for review. Floyd is well known for his expertise in the WWII Luftwaffe genre, as well as his personal exploits flying Snakes in the U.S. Army. This sheet was sponsored by Kitty Hawk, the much-maligned (but in my opinion) EXCELLENT company which provides us with products which would NEVER have seen the light unless they took the plunge. So you have to work to make them to personal standard? Huff… part of the price of admission. ( I swear if you give these guys a new, free Lexus they’d complain about the new car smell)

To Glen Coleman and Joe Lortie, I don’t know you but owe you guys a beer for making these kits and this sheet a reality. Ignore the flamers and naysayers, they aren’t paying the bills to make your goal of constantly improving and being one of the best Model companies out there a reality… every new kit is better than the last. THANKS!

When I learned of this sheet’s availability, I jumped at buying one because the Tamiya F-4D I had begun last year to review Eduards’ Multiple Ejector Rack (MER) and Triple Ejector Rack (TER) set was languishing while I did other reviews. Did I say “Languishing”? This was because, after several requests from reviewer corps leadership Dave Morrissette and Dick Montgomery to clean out their pending review stash because folks don’t necessarily build. (Fellow Texan Dick, say “Whoo-eee” for the Brits). My “punishment for volunteering” meant I built several personal stash kits using SAC gear to demonstrate their installation, which I find great… receipt of this sheet meant and that meant finishing the F- 4D (so I can use the 1/32 AIM -4 missiles from Eduard that I bought at last year’s Nationals as well!).

There are 14 options on this sheet, and if you can afford a stable of Vietnam era 1/32 scale F-4’s to display, you can do myriad F-4C/D, and a couple of E’s as well the list of MiG killers, This includes Ritchie, and as a bounus Col Old’s and Chappie James as subjects, as well as several other MiG killers. They have researched to the point of including the flight call signs, The sheet also includes one bird out of RAF Bentwaters in 1974 with a B-61 Nuclear alert loadout as noted by Floyd’s friend and F-4 driver, Steve Bricker. Time for someone to come up with a 1/32 B-61…

One thing that makes this sheet so special is the information contained on each aircraft and the weapons configuration for not only specific missions, but standard purposes. I found one of the options extremely interesting, that being 2 x 370 tanks on outboard pylons, 2 x Napalm on inboard pylons and 4 x CBU 52 or CBU 58 on MER Centerline. That would have been SAM suppression at its finest. Sparkle and burn.

I am currently on the road at March ARB in California; that means I painted the F-4 in the Hotel room using AKAN’s Vietnam set, with Vallejo glosscoat. The MIG metallics were used with no problem. ALL were painted with a cheap airbrush (which had the usual clogging issues for acrylic) but I succeeded in getting it done. The paint scheme may be a bit off, but I have several references and in the end should have used the decal profiles. Oh well… maybe to fix later, yes?

This whole decal package is on two sheets crammed with detail. The basic stencils are not included, which are available on the kit sheet (Which does work well). Registration is perfect, as is color.

Using the actual decals proved they are of first rate quality! Stenciling was legible, and in scale. You can see in my photos that the decals behaved in a first-rate manner. They do tend to grab, so flood the part with water before you press the decals down. They are also very strong, with no tendency to curl under or up. I used no setting solution, and had zero problems with silvering. As this is a simple set, I was able to have all the decals I needed sans the kit items in place in about 15 minutes… as long as you gloss coat the surface, you will have no problems.

Final assessment: Floyd has a great sheet here! I think he may still have the 1/48 sets and 1/72 sets available, and they are worth every dime. Well researched, presented in a logical manner, with detail others could emulate. Nailed it Floyd! Full marks and thanks again to all who were previously mentioned!