Spotlight On Battle of Britain Defenders 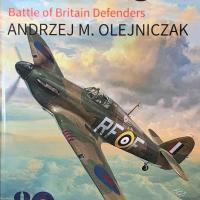 The latest title in the "Spotlight On" series published by Mushroom Model Publications focuses on 40 individual aircraft that defended the UK skies during the Battle of Britain. While the Supermarine Spitfire and its pilots are probably most celebrated as the heroes of the air war, it was the Hawker Hurricane that was the true work horse of the battles raging over England 81 years ago.

This book is the latest of this popular reference series for aircraft modelers, presenting detailed illustrations of the Hawker Hurricane Mk. I, the Supermarine Spitfire Mk. I, as well as a couple of illustrations featuring Boulton Paul Defiant I. The aircraft illustrations are incredibly well illustrated with full color profile views of the camouflage, colors and markings. Of course, there really wasn’t a lot variation amongst RAF camouflage, and personalizing the planes or even adding victory/kill markings was discouraged. Therefore, the most “personalized” a plane may get was the name of the city that may have sponsored the plane, or the name of a girlfriend or wife on the plane, or a flag, symbol or insignia indicating the Nationality of the pilot flying the plane.

The RAF pilot corps was made up of many different Nationalities, and the illustrations document the pilot who flew each plane, and the drawings document their Nationality with the flags, or country symbol, like a Kiwi bird for a pilot from New Zealand. However, the camouflage pattern for both the Spitfire and the Hurricane consisted of the standard Dark Earth and Dark Green in either the “A” or “B” pattern. The illustrations also detail which planes deviated from the standard Sky underside, which wasn’t many.

The book includes a list of the RAF pilots who had 10 or more victories during the Battle of Britain, and the final pages provide color illustrations of the Spitfire and Hurricane instrument panels, as well as an index of the various dials and gauges.

The color profiles were all completed by the book's author, Andrzej M. Olejniczak, and are really fantastic. The details and colors look awesome. I highly recommend this book to anyone with an interest in early RAF planes, or the Battle of Britain. It should be a great resource for RAF model builders.

Thank you Mushroom Model Publications for the review copy, and to IPMS/USA for the opportunity to review it.