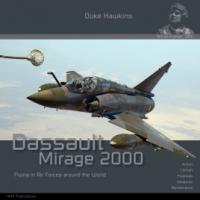 The Dassault Mirage 2000 is a French multi-role, single engine fourth generation jet fighter manufactured by Dassault Aviation. It was designed in the late 1970s as a lightweight fighter to replace the Mirage III for the French Air Force (Armée de l'Air). The Mirage 2000 evolved into a multi-role aircraft with several variants developed, with sales to a number of nations. It was later developed into the Mirage 2000N and 2000D strike variants, the improved Mirage 2000-5 and several export variants. Over 600 aircraft were built and it has been in service with nine nations.

This publication is a close-up pictorial essay of the Dassault Mirage 2000 in service with the Armée de L'Air and many other air forces. Includes details of all versions, from the 2000 B/C to 2000-5 and 2000-9.

Every page includes high quality, color photos of Mirages in flight, close-up details, and text explaining various details and features of the aircraft. There are several contributing photographers adding their work to this book and all are given credit for their efforts. There is no index to the contents, however there are sections dedicated to specific details and Mirage 2000 aircraft versions. The sections are noted on the top right and left corners of the pages.

The detail images are really helpful to the modeler:

Several manufacturers offer model kits of the Mirage 2000 in 1/72, 1/48 and 1/32 scales. This publication will offer a wealth of details and colors information for those inclined to go the extra step. Often kit instructions may be a bit vague as to how parts fit together, or what the colors are for specific features, this book with help clarify those issues immensely and offer a useful balance of detail for the modeler.

Many of the images are provided with text that point out features and details that might be overlooked by the casual observer. This is especially helpful. Most of the images show very clean and well-maintained aircraft, especially the wheels wells and landing gear. Looking closely one can see the camouflage paint schemes are not always applied perfectly, as some blotching and fading can be seen. Some dirt streaks and minor oil stains are visible: just enough to satisfy the modeler who likes to weather his work.

The images are especially useful for details, weapons, markings, detail colors and color schemes used. Several special colorful paint schemes are included scattered throughout the pages that will certainly serve as inspiration for most modelers. Although paint colors are not called out the diehard modelers can research the colors for his/her project. The text is extremely helpful in understanding what the various items are and how used. If you are an enthusiast of modern aircraft this publication will be equally useful and enjoyable, as well as a great reference source. A great addition to anyone's reference library. If the rest of the HMH publications are anything like this these books are well worth adding to the modeler's reference library.

This is an outstanding publication and I very highly recommend this to fans of modern aircraft. The quality of the images is second to none. It appears that several people contributed to the images found within the covers, and all of them did a credible job. It is amazing.

I wish to thank Casemate Publications and IMPS/USA for the opportunity to review this publication.