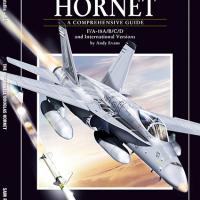 Right off the bat, let me tell you that I am a fan of this SAM series of books. They provide everything a modeler needs for a knowledge of the plane covered and in tis case, it is the F/A-18 A/B/C/D Hornet. The books is 192 pages of soft back goodness with excellent pictures and illustrations.

The table of contents has the following:

So roughly the first half of the book is a history with tons of photographs of the Hornet’s development and deployment as well as side profiles of many markings. Where this book really excels to modelers is in the second half where it starts with eight separate builds of the Hornet in all the popular scales.

Reviewing the first half of the book covers the variants of the Hornet along with its development by McDonnell Douglas. One great thing which is found on the 3rd page of the book is a glossary of terms which is so helpful for people not familiar with Navy and plane terms. For example, there are common ones like USN for US Navy but also NWDC for Navigation/Weapon Delivery Computer. And being right up front, you can find it easily if stumped by an acronym later. I also want to say that the pictures included in this part are top notch- color and detail is amazing. There are pictures on the ground, in the air, taking off, landing and of all squadrons including the aggressors and their colorful schemes. And of the Blue Angels…sweet! The international versions are covered also- Canada, Australia, Spain, Malaysia, Switzerland, Kuwait and Finland. This is followed by 10 pages of color profiles of all types.

The second half of the book deals with modeling and reference data. It starts with wonderful builds:

Many of these great builds use aftermarket, offer tips and tricks for modelers, and are wonderful to see.

Next is a section of 26 pages of walkaround detail shots of landing gear, antennae, slime lights, refueling probes, and much, much more. The pictures are crisp and well captioned, AND the entire section in on a different color background than the rest of the book which makes it super easy to find when you are looking for a reference shot.

The next section is called “Understanding the Subject” and is a wonderful reference as it goes through the progression of Hornet evolution noting differences between each. There are also extensive drawings of the throttles, fuel tanks, ejection seats and much more. One of the more interesting things for me was an explanation of the hand signals pilots and ground crew use on aircraft carriers and what they mean. This was followed by an explanation of the arm movements used by deck crew to move and control the plane.

The next section covers all Hornet Squadrons, not only for the USN and USMC, but also all the foreign operators and their squadrons.

A “Kitography” is next and lists kits, aftermarket, decals, and photoetch for all types of Hornets. This is great if you are looking for a special set of markings or need a resin aftermarket set. It does say contemporary and I did notice the fist Hornet I ever built- the Hasegawa 1/48 is not listed but it may be OOP at the moment.

Lastly, there is a 1/72nd scale plan drawing and also a gallery of photos.

This is a spectacular book covering a great subject still in front line service. It covers history and modeling thoroughly with great writing and photography. Add in excellent model builds and references and this is must have for anyone interested in the F/A-18 A-D. Most highly recommended. You need this book!

My thanks to SAM and a special shout to the gentlemen who built the kits – excellent work by all involved. Please keep them coming!