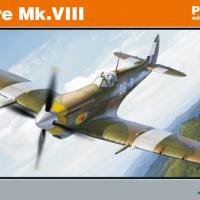 Eduard’s Spitfire Mk.IX kits set a new standard for Spitfire kits. The fit was perfect throughout and the shape was spot on. With the addition of the Brassin range of parts, the modeler finally had the ultimate late version Spitfire models in 1/48th scale. The Mk.VIII version had never been done in kit form. Based off their Mk.IX kit, it would have been easy for Eduard to just have the modeler cut and rescribe panel lines, but this is Eduard we are talking about. Eduard completely retooled the wings and fuselage to show all the salient features of the Mk.VIII. The wings have the shorter ailerons, fuel tanks in the leading edge and the small bulges for the guns. The fuselage has the retractable tail wheel already molded open. In this release you also get the longer wingtips, the first time from Eduard.

As is typical for an Eduard Profipack, you get the four beautiful light grey sprues. There was no flash on my example and everything was molded flawlessly. The surface has some of the finest recessed panel lines on any kit. There is a circular clear sprue which has the open and closed portions of the canopy. Also in the box is one fret of Eduard’s famous pre-painted photo etch that I love. There are also EZ masks for the clear parts. There are two sheets of decals, one is the stencils and one is the actual markings which are printed by Cartograf. There are markings for six aircraft.

On this review build I would be using the Brassin Cockpit (set # 648199), Gun Bays (set# 648201) and the Super Fabric Seatbelts (set# 49074). I had a leftover 90 gallon slipper tank and some wheels from the Eduard Mk.IX Royal Class boxing that I wanted to use on this model.

The kit cockpit is very nice out of the box. It really does build up beautifully. The Brassin cockpit is exquisite and a gorgeous piece of engineering. There is nothing to cut on the kit to make the Brassin cockpit fit. This makes this set all the more remarkable. I painted mine with Polly-S British Grey-Green after pre-shading with Tamiya NATO Black.

Before starting on the wings, I decided to do both wings. I built a Mk.IX that only offered one side so I thought I’d try both sides on this build. I removed the gun covers by chain drilling the panels and sanding back to the panel lines. Adding the photoetch and resin parts was relatively easy. Just remove the parts from the pour blocks, paint and install. It really is that simple. Just follow the instructions. The fit of the gun bays in the wings was near perfect. There is no interference with the wing at all as long as you sand the resin as it is designed. I did have one wheel well that didn’t quite line up but that was my fault. It was taken care of with a little sanding and filler. I think a way to stop that MAY be to attach the part to the lower wing not like Eduard suggests to the upper wing.

The rest of the wing goes together like a Rolex watch. It is perfectly engineered and fits perfectly. All model kits should be this good. The other control surfaces were added with no problem whatsoever.

I had an Ultracast upper cowling and exhaust stack set for review so I decided to use them on this model. There was nothing wrong with the kit ones, except that they needed to be assembled. The Ultracast exhausts were easier to use and featured hollowed out exhausts. The big bonus of this set is that the exhausts can be added after the model is painted.

Adding the landing gear was easy. I had leftover Brassin wheels from the Royal Class kit so I elected to use them but the kit wheels were nice. And with that the kit was just about ready for paint. I used the Eduard EZ Masks for the canopy and various lights. The rest of the model was masked up to protect the cockpit and exposed wing armament.

With the release of the Eduard “Aussie Eight” there was new research about W/C Bobbie Gibbs aircraft, the subject of my build. There were pictures of the real aircraft in the book and they indicated that there was a slipper tank on the belly. Luckily I had a slipper tank left over from the Eduard Spitfire Mk.IX Royal Class kit so I used that on this model. The book also showed some unique new research on the colors so I decided to incorporate the new colors on this build.

The entire model was given a wipe with Polly-S Plastic Prep prior to painting the interior color over the canopy area. After that the model was sprayed with Alclad Grey Primer. I love this stuff. Not surprisingly everything was pretty much perfect. The model was then given some Tamiya NATO Black to pre-shade panel lines and break up the monotone colors. The white areas were painted and allowed to dry overnight before being masked with Tamiya tape. The Tamiya Medium Sea Grey was painted on the bottom. This was then lightened up with some white to start the weathering process.

I used some Eduard Camoflage Masks for Scheme A prior to adding the Dark Green. There were some unique shapes on the fuselage that were not any ‘official’ paint scheme so these were done with Tamiya tape. Then the Tamiya Dark Green was sprayed on the kit in the appropriate areas. This was also lightened.

The entire model was oversprayed with Future with some drops of Tamiya thinner in preparation for the decals. The stencil decals were added first. The performed flawlessly and reacted well with Solvaset. I did not put stencils on any part of the overpainted tail. I figured the Aussies would not have worried about it. Then the aircraft personal decals were applied. I started with the sharkmouth because if I screwed that up then I could adapt my marking options. Thank God I didn’t have to as the decal fit perfectly. I did have some silvering but that was my fault as my gloss coat wasn’t as glossy as I should have done. Taking a new Xacto blade the decals were sliced and Solvaset made everything right.

The entire model was sprayed with Alclad Flat to prep. This was in preparation for the weathering to come.

Weathering was started with a wash of burnt umber along the panel lines and spots along the areas that would be dirty. This was followed up with some dot filters being applied. I used buff and a little bit of white to fade and lighten up the upper surfaces. On the sides I ‘streaked’ it vertically and on the wings I went front to back on the wings. This was followed up by some aluminum paint applied with a sponge including the leading edges that are shown worn on the real aircraft. Some Mig pigments were applied here and there to represent collection of dirt and mud. The final step was to apply heavily thinned Tamiya Buff in a fore and aft direction. This joined the model to the earth and imparted the illusion of movement.

I also had an Ultracast propeller for review so I elected to use it on this build. It was easily prepped for use. The blades are slightly thinner and there is detail on the spinner that Eduard didn’t add. I just built it up and weathered it.

With that done it was just a matter of adding the final tiny parts and removing the masks from the canopy and lights. With that the model was done.

You owe it to yourself to buy one of these Spitfire kits and build it. It is the pinnacle of model making and a complete package. This makes the fourth Eduard Spitfire that I’ve built and I have to say that I enjoyed every one of them and look forward to building more. I’ve built them with the Brassin items and without. The Brassin items are nicer than the kits but that is up to the model builder. I like using the Brassin items but if I didn’t have the money there is nothing wrong with the kit items.

I like the Eduard approach of using the Weekend Edition for the minimalist, the Profipack for the more advanced builder and then using the Brassin sets for the modeler who likes to build the very best that a model has to offer.

The Brassin cockpit set was is a gorgeous addition to the model. It fits perfectly with no sanding and thinning of parts. It would have been really nice to include the Super Fabric seatbelts in the set, instead of the pre-painted version but that is a nit-pick.

The Brassin gun bays are a nice addition which adds to the look of the fighter. Of course you have to want to add the opened gun bays.

The Ultracast aftermarket parts are really nice and easy additions. I especially liked the upper cowling. I’ll admit that the exhaust is awesome and it is easier to add them after you paint the aircraft. Highly recommended sets.

Overall this is a great kit that was just spruced up with a little aftermarket stuff. If you were going to buy one kit, these Spitfires are the ones I’d buy. I love them. The Brassin and Ultracast items are just icing on the cake.