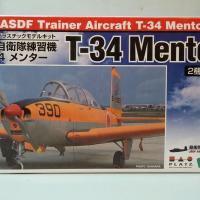 Platz, out of Japan, has been involved in the 1/144th modeling community for a while. They have produced many of their own kits and have teamed up with another Japanese company called F-Toys. F-Toys produce various subjects, among them being 1/144th scale aircraft kits. These kits from F-Toys are typically pre-painted, mostly assembled, and somewhat snap together. Many 1/144th scale modelers will take these pre-painted F-Toys kits strip them down, add details, repaint, and decal them. However, now we are seeing Platz take those same F-Toys kits and produce them as traditional model kits. This T-34A is a prime example of that venture; first it was released under the F-Toys name as a pre-painted kit, and now it’s released as a traditional model kit.

The Platz T-34A Mentor comes two kits in a box. The parts are molded in a nice grey styrene with very nice recessed panel lines. There are 27 grey parts and two clear parts (one being the canopy and the other a much-needed tail support piece). Also included are two parts to make a stand should use wish to model your T-34 in-flight. The fuselage and wings are molded as single pieces. This eliminates any seam down the middle of the fuselage or along the leading edge of the wing. A cockpit is included that consists of two seats and two instrument panels. The canopy is nice and clear; however, it suffers from four locator pins on the inside of the canopy. This is a carryover from this kit being released as a mostly built F-Toys kit. The kit includes decals for eight options, all Japanese Air Self-Defense Force (JASDF) trainers.

I had this kit together and ready for paint in a few evenings at the bench. It was a relaxing build. There are two areas that you’ll need to pay attention to. First, if you do not want to model your T-34 in flight, you’ll need to fill in the gap under the wing where the support stand goes. Second, the aft portion of the wing and the bottom of the fuselage leaves a significant gap. The good news is that filling and sanding this gap doesn’t destroy any of the surrounding details.

I added seat harnesses made from masking tape to my seats. In the future, I would vacuum-form the canopy. The reason is due to those four locator pins on the inside of the canopy; they really stand out. I chose to model my T-34 on the ground. The downside to this is that there is literally no place for any type of nose weight. As such, the kit is a tail-sitter. To remedy this, Platz has included a small, clear tail support. This keeps the nose down, but could detract from the overall appearance of the model. It may be best to secure this model to a small base.

The marking options in the kit are for either overall natural metal finishes or natural metal with some splashes of international orange and fluorescent red/orange. I chose to model one of the more vibrant schemes. The decals included the anti-glare panels, a nice touch! All the decals performed exceptionally well with the Micro-Sol/Micro-Set solutions.

These new Platz kits are great. The level of detail and fit make for some enjoyable “weekend” builds. The decals perform exceptionally well, but leave a little to desire if you want to model anything other than JASDF. However, there are a few companies that have produced some non-JASDF T-34 decals-Vector144 and (surprisingly) Platz. Overall, this was a fun build and looks really nice on the shelf. I can definitely recommend it. Thanks to Dragon USA and Platz for providing the kit and for IPMS/USA for allowing me to review it.