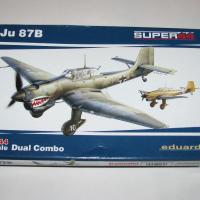 First flown in 1935 and making its combat debut in 1936, the Ju 87 was used until the end of the war, first as a dive bomber (Until the Luftwaffe lost air superiority and it became easy pickings for allied fighters), then as a tank buster, and finally as a night attack/harassment aircraft. Arguably its biggest contribution was the fact that it became the propaganda symbol of German air power and the Blitzkrieg victories of 1939–1942. Roughly 6500 Ju 87s of all types were built from 1936-1944.

Upon opening the box you will find an 8 page color instruction booklet, 2 sprues of injected plastic molded in grey, a VERY small photo etch fret, 2 separately bagged canopies and a very nice decal sheet. The plastic is very clean and crisply molded… but panel lines?? They are really finely done but at this scale I’m not sure they are necessary. The P/E fret is…well….small and had me wondering if my eyes were going to handle this well!

Three steps are all you have with these kits. Step 1 is assembly of the fuselage, wings stabilizers & tailwheel. Pretty simple but I recommend that you leave the P/E struts for the horizontal stabilizers off until later as it makes painting easier. Also, they are very thin and can be bent if you breathe on them….OK, maybe not by breathing but you get my point! Step 2 is the underside and wing flaps. I recommend painting before adding all of these parts, with the exception of the flaps. I tried both ways since I had two kits and found it easier this way. The flaps are a bit tricky IF you don’t go slowly. The contact points are small and I used a thick slow-set CA to place them on. Step 3 is for the canopy and propeller, and painting the canopy was a challenge to say the least. I tried two ways to do this, # 1) paint it freehand and use a toothpick to clean it up and #2) scribe the lines in the canopy and paint it freehand wiping away the excess as I worked. For me #2 was the easier and better method. The very last 3 parts were the rear guns, antenna and pitot tubes. All three are VERY small and fragile (I was afraid of breathing on these also!) so go slow and you should be OK. Everything went together easily in this kit but it was very small…or maybe my fingers were too big? The props are interesting in that you have to assemble them. I thought this would be a pain but it really was pretty easy.

You are given 3 marking options

I chose A & C to make it easier for me (plus who can resist the teeth!). I used Testors Acrylics for these and after a coat of Future the decals went on and set nicely without any help.

If you are looking for nice 1/144 Stuka I recommend these. I was surprised there was no interior but have found out that someone does an insert!! How cool is that!

I would like to thank Eduard for supplying this kit, the review corps for letting build it, and all of you for reading this. Happy modeling!

Both kits with my trusty quarter!