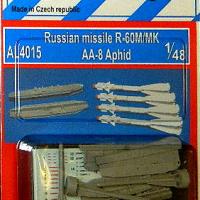 Aero Line is a new company to me; I offered my services, and am glad to have had a chance to evaluate these missile sets. Thanks to Petr Vesely for providing the sets and IPMS/USA for sending them to me to review.

First: Set AL 4014: Comprised of three missiles, two adaptors, and a transport box. The set contains 19 resin parts, (missiles with the aft fins attached, clear seeker heads, and a set of protective caps for the seekers); a photoetched sheet with forward fins and rail adaptors; and decals for the missiles and the transport box. I would say this was an excellent set for the diorama builders out there.

Set AL 4015: The missiles and launchers are exactly as 4014, except you have four missiles and four rails to accompany all, without the transport box. Consisting of 18 resin parts, a photoetched sheet with forward fins and rail adaptors, and decals for the missiles and the rails.

These sets are the ultimate in detail work…a bit small for ol’ beef-hands, but I got one of them built to photograph. First, drill out the attachment holes for the fins using the photos as an example. Don’t ask me which size bit to use, but it was somewhere around .070 in the micro-bit range. I used the technique of removing the fins, using tweezers to grasp (gently!) and dip the attaching tabs into thick superglue, then installing the fins. After they had dried, I dipped the entire front of the missile in future floor wax to seal the brass and act as a binder to help hold the fins in place. Let this dry, then proceed.

If you want to use the clear seeker heads, beware – I split the front of the missile and ended up “cheating” by using the protective cap, painted red. I would also recommend doing this before you install the forward fins to make it less likely that you will break your fins off! Best way would be the “twisting X-acto ® blade” method, then carefully enlarging until the seeker head fits. In any event, the detail is available…

In the end, I used white primer to paint the entire missile, gloss white for a second coat (Duplicolor is still my favorite), then applied the decals. They are hyper-thin and definitely at risk to folding over on themselves in an unrecoverable fashion. Take your time!

The transport box was painted primer gray, black interior per the box “card” photos, and touched up with gray for the areas I got a bit aggressive with. Glosscoat, decals, flatcoat – done!

You see the results: an impressive bit of work from Aero Line, and much more finessed than most kit R-60 missiles out there…well worth the investment. Thanks again, Aero Line, for supporting IPMS/USA!

Completed missile and box
Previous Next