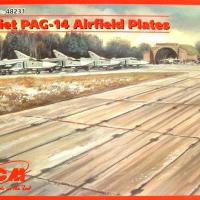 One of ICM’s most recent offering is a set of PAG-14 Airfield plates used in the construction of airfields by the Soviet Union at home and in the Warsaw Pact nations. This particular set is for 1/48th scale. Knowing little of Soviet airfield construction – and what I did know centered on the use of hexagonal blocks for construction – I conducted online research into the PAG-14 plates. My first queries turned up a few photos, but then I found a research paper online — Naum Sapozhnikov and Raymond Rollings, Soviet Precast Pre-stressed Construction for Airfields, April 2007 — that shed a lot of light onto the use of these plates for airfield construction. Here is a little of the background from that paper.

The Soviet Union began building its first concrete airfield pavements in 1931-1932. These were constructed using unreinforced concrete hexagons 1.2m (48in) long per side and 100 to 140mm (4 to 5.5in) thick. As aircraft became heavier, the hexagon length was increased to 1.5m (60in) and thickness increased up to 220mm (8.8in). These unreinforced hexagonal slabs often had problems with rocking and spalling, and as modern concrete placement equipment became available after 1950, rectangular cast-in-situ pavement slabs became more common.

The Soviet precast concrete industry was well developed, and precast pavement construction continued to evolve as an alternative method to cast-in-place concrete pavements in the USSR and allied nations. Soviet technical literature of the 1960s and early 1970s contains a number of descriptions of precast concrete road pavements as temporary roads, under heavy industrial traffic, with
generally favorable results. For an airfield, reinforced concrete was recognized as superior to unreinforced concrete. Pre-stressed, precast pavements were considered the best for efficient use of materials, and plant manufacturing ensured high and consistent quality. Crushed granite was the preferred aggregate for these precast, pre-stressed slabs in Soviet experience. Precast, pre-stressed slabs were found to be structurally sound for aircraft operations and they also offered particular advantages for construction in adverse weather, rapid installation, maintenance on unfavorable soils, and construction in remote or environmentally sensitive areas. Nevertheless, unreinforced poured-on-site concrete remained the most common airfield surfacing because of its simplicity of construction and technology, despite a number of significant shortcomings.

By 1970, the PAG XIV precast slab was the standard approved slab for airfields, and a number of plants were capable of production of such slabs. Since the
end of the Cold War, this slab has been encountered several times by the US Air Force (USAF) when operating in areas previously dominated by the old Soviet Union. These 2m x 6m x 18cm slabs are pre-stressed longitudinally and provide excellent load-carrying capacity. They are reinforced with a double layer of 12mm diameter bars longitudinally and laterally and with mesh. Two lifting loops are exposed on each side of the slab. After placement, these loops are welded together and the joint is filled with mastic. In fact, an airfield in Uzbekistan supported intense US Air Force C-17 aircraft operations for several years without any structural distress. Precast slabs were often stockpiled at Soviet military airfields to be used for rapid runway repair. The slabs were stacked into piles not more than 5 or 6 slabs high, often by the runway, taxiway, and apron.

This is perhaps the most empty kit box I have ever opened. This is not a single model based kit like most manufacturers’; the modeler has to construct the base plate from the 32 rectangular injection-molded slabs 500mm x 333mm x 3mm included in the kit. They are in a single small bag and the rest of the box is empty. There are no instructions, jut an isometric diagram on the side of the box showing a grid of rectangles. Each slab has nice detail – both the cast diamond grid of the concrete surface and the smooth recessed edge of the slab representing the mastic.

In construction, this set offered three challenges. The first was algebraic trial and error to figure out the size of two bases that used the majority of plates. I created two, some with cut plates, to fit existing wooden plaques. I was left with one surplus plate! The second challenge was in gluing the sections together, since each plate has a slight taper for ease of mold release. This made gluing the sections more of a challenge, but I chose not to reinforce the joints with more styrene. Where I cut the plates, I glued strip styrene of the correct thickness to seal the ends. Thirdly, there is no locking mechanism between the kit plates, so the joints can be a bit weak.

With assembly done, it was time to paint the plates. I used a based coat of beige paint right from a commercial rattle can. Once dry, I masked and over-sprayed selective panels with Model Master enamel paints – Radome Tan and Sand (ANA color) to break up the color monotony. Next, I applied brown and black washes by WARPIG, working gently in removing excess pigment in order to pick up the diamond pattern and subtle color variation, without the plates looking too dirty. The black mastic (presumably tar) was applied by brush, and I used a faded black by Humbrol. The rectangular grid-like appearance was a bit stark with the tan and black, just like the real thing. Fading with a very thin light sand color would help blend the color further, if desired. At poorly maintained and abandoned airfields, it is not uncommon to see grass growing in place of the mastic.

I really like this set by ICM. While it does not provide the convenience of a single base to be painted and placed down, it does offer the modeler the material and flexibility to build a larger base or complexly shaped scene. The set is particularly good for dioramas. The price means that a modeler can construct large scenes at an affordable price. Highly recommended.

I’d like to thank Squadron for supplying ICM’s kit for review, and IPMS/USA for allowing me to review it.

Assembled plates from underneath

Small base display
Previous Next