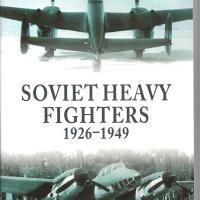 This book comprises twenty-two segments each covering a different aircraft design. The heavy fighter concept was one that was tried out by many different nations. In theory these aircraft were to perform a variety of missions such as ground attack, bomber protection/escort as well as reconnaissance without the aid of single engine fighters. More often than not it was found that the heavy fighters needed their own single engine fighter escort for protection on missions.

Many of the aircraft covered in this book are by lesser-known designers and thus the aircraft themselves are lesser known as well. Many of these designers struggled within Stalin’s government where failure was almost certainly to catch the ire of the communists in charge. The communist government and Stalin’s purges lead to an exodus of many bright technicians and engineers. This in turned caused issues with the ability to design reliable engines thus requiring many to be imported.

The list of aircraft covered include the Grokhovsky G-38, Polikarpov VIT, Tairov OKO-6, Bisnovat Sk-3, Grushun Gr-1, Yalovlev I-29, and many others. Most of the aircraft in this book were prototypes, paper ideas and those that did see production for the most part were not produced in quantity.

The Soviets never really developed a successful heavy fighter independently, they did have success developing one from the Petlyakov Pe-2 already in production. The author takes the reader through the trial and tribulations not only of the aircraft designs themselves but those faced by the designers under a system where the powers in charge spied on and blamed everyone but themselves for the problems encountered. This makes for an interesting read and an opportunity to learn about many lesser know aircraft from the period from behind the iron curtain.

I enjoyed this book and learned a lot from it. I pride myself on my knowledge of the lesser-known WWII aircraft type but many of these even I had never heard of! I can recommend this book to anyone with an interest an interest in WWII, WWII era aviation including the immediate years before and after, Soviet aircraft and aviation history. All will find something of interest in these pages. My thanks to Casemate for the review sample and to IPMS for the opportunity!