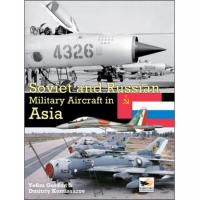 This book is the third in a series by these authors. It was preceded by volumes on the Middle East and Africa. In these pages the authors cover all Soviet/Russian built aircraft used by the various Asian nations from WWII to modern times.

The book has twenty-one chapters and they are laid out alphabetically by country. With the start of the cold war, the Soviets began to try and influence the politics of the Asian continent. This was done in a large way by supplying arms to many other nations not only in Asia but worldwide, not only to their client states but to those that wanted to play both sides as well.

We are treated to a nation by nation review of aircraft supplied to and used. Their combat records are covered as well as the service records for those not used in conflict. The countries covered are: Afghanistan, Bangladesh, Cambodia, China, India, Indonesia, Japan, North Korea, South Korea, Laos, Malaysia, Mongolia, Myanmar, Papua New Guinea, Sri Lanka, Taiwan, Thailand, Turkey and Vietnam. The largest chapters by far are those of China and India, but even those nations that only received an aircraft via a defector are covered.

In addition to all of the above, at the end of each chapter are tables of every single known Soviet/Russian built military aircraft used by that nation, what squadron used it and in many cases its ultimate fate. All Soviet aircraft manufacturers are covered with those by Mig getting a large share.

This is a very good book! The authors really know their subject and do an excellent job of communicating that knowledge. The photos and color profiles are gorgeous. They illustrate the wild color schemes and lesser know national markings very well! These alone are a boon to the modeler! They will keep the modeler busy and inspired for years to come! If you have any interest in Soviet/Russian aircraft, the air forces of Asia or military aviation in general, you will want this book!! I strongly recommend this book to all!