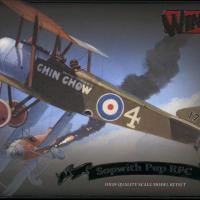 If you build plastic model airplanes and have not heard of this kit manufacturer before, you must have been spending a year or so under a rock somewhere. Wingnut Wings is a New Zealand-based company with a passion for World War I subjects in general and aircraft in particular. This new company made a big splash in the hobby last year when they released their first four World War I kits and created an even bigger wave this year when they released four more. Everything is 1/32 scale and produced at a level that leaves most other kits in the dust. The almost overwhelming response to the release of the first kits was a wide-eyed Wow andthe latest kits deserve the same response.

This Sopwith Pup kit, like all of the other Wingnut Wings WW I kits, is far superior to almost anything currently offered by other manufacturers. To begin with, Wingnut Wings’ kit boxes are, in themselves, spectacular. But their unique graphics are just a hint of the enjoyable model building experience that is packed inside. Upon opening the box, the modeler will discover an array of individually packaged sprues of highly detailed and well-engineered parts, a fret of photo-etched parts, an outstanding sheet of decals and a comprehensive, but easy-to-follow instruction book that can only be described as amazing. Anyone who has ever considered but then feared tackling a WW I aircraft kit will find that these kits are just what they have been waiting for. Wingnut Wings kits truly beg to be built and promise to reward the effort.

The kit includes a large sheet of perfectly registered and crisply printed decals (by Cartograf) that includes complete markings for the following five aircraft:

The surface detail of the parts is top notch. The exterior fabric-covered surfaces are rendered in a realistic manner with subtly raised rib tape and stitching, and rigging hole locations are dimpled for accurate drilling. Interior sidewalls are molded with appropriate raised details and all of the interior structure is provided in multiple finely-detailed pieces that fit together nicely. Ejector pin locations are strategically located to minimize filling and cleanup, and sprue attachment points are offset from the surface detail of mating pieces. A highly detailed 9-cylinder Le Rhone 80 hp engine is molded in a mere 17 parts, and two propeller types and multiple side cowl panels with two engine cowl options are included for either Standard and Whitehead built aircraft. Fixed or adjustable tail planes are also included.

More information about this kit and the others that are currently available can be found on Wingnut Wings’ website: www.wingnutwings.com.

I have removed most major parts from the sprues and have dry fitted them. Everything seems to fit well and invites me to begin construction. Obviously, that means I must pre-paint all of the ‘wooden’ parts and begin adding the wood grain detail with oils first. So, I’ll get on with that phase, and while the oils dry I’ll paint and assemble the engine. When I finish everything, I’ll report on the full build in part II.

My thanks to IPMS USA and Wingnut Wings for the opportunity to build and review this wonderful kit.