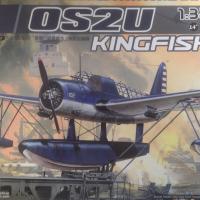 Thank you to the great folks at Kitty Hawk Models for bringing a welcome new large-scale kit to U. S. Navy propeller aficionados. Kitty Hawk subjects are starting to fill out my collection more and more! Thank you also to the IPMS Reviewer Corps staff members who do the hard work in getting us kits to review.

This new release from Kitty Hawk fills a long-standing gap in 1:32 scale early USN aircraft. The Kingfisher is represented in the scale modeling world by very old but generally still available smaller scale 1:48 and 1:72 kits, which can be upgraded and corrected by a wide variety of after-market components. However, I am unaware of any injection-molded Kingfisher kits in 1:32 scale, let alone a modern release. Thank you Kitty Hawk!

This build review follows on an earlier prebuild in-the-box review. Please refer to the earlier review for descriptions of the instruction layouts, decals, etc. I will summarize the construction, how the kit option choices turned out, and will shamelessly share my mistakes and fixes. A detailed step-by-step build log follows the review.

The kit will produce a very nice representation of the OS2U in an impressive size. I am happy with the final product. I was very pleased with the kit in my initial review, in box. However, actual construction was challenging, sometimes frustrating, and occasionally baffling. While I was following the instructions, I found incorrect or absent part references, incorrect decal placement and interesting construction logic. The exterior surface detail is excellent. Smaller, longer, or thinner details and parts easily broke, even with careful cutting. During the prebuild review I did not note any unusual flash, however after I applied a base primer coat a subtle but pervasive edge of flash was common. I had to tweak and adjust nearly every part for proper fit. The distribution of complexity is unusual, for example the engine has a disproportionately large number of small parts, yet other areas seem not so complex. The instructions had some typos, and in one case referred to a part that was not included. The decal placement guide showed incorrect markings for the VO-1 example I chose to build, but I was able to substitute other decals from other versions on the decal sheet.

I really did enjoy building the kit and am pleased with the result, but I am now not convinced the kit is for a novice. It took time and patience to work through the issues described above; you should be an experienced builder to get the best out of the kit. Eduard will be releasing aftermarket detail sets and a masking set which will enhance the plane further. I also noted a Edo type of float and I am sure more aftermarket will follow. I recommend the kit, but with the caveat that completion may require more work than anticipated and builders should have more than few kits under their belts to work past the instruction errors and small bits included.

Construction was challenging, with problematic fit throughout. The build log below details the challenges on a step-by-step basis. I did elect to build the float version. Replacing the pylon bracing with plastic rod and installing 20 gauge wire to simulate float bracing was not difficult. Installing short brass tubes to strengthen the float-to-fuselage join was also not difficult, producing a very strong joint. The wing tip floats had some braces that were short, and I lengthened them by using braces from the unused parts for the wheeled version.

The decals worked very well with Microscale solutions and were very durable while being nudged into place. I really appreciated this characteristic on the long and narrow wing walkway stripes. Registration and opacity was good on all decals. The national insignia with red center was a little translucent over the walkway stripes. This see-through problem could be fixed by applying one of the unused versions’ white stars first, followed by the red-center national insignia. The decal placement sheet did not indicate red-center national insignia, but the red-center style was standard in 1941 on yellow-wing aircraft so I used them. The decal placement guide also incorrectly shows a “7” on the each wing top. The wing numbers should each be a “1” to match the numbers on the red fuselage band. I easily trimmed the provided “7” decal into a “1”. I painted the propeller in aluminum with a flat black rear panel, and used the red-yellow-blue tip decals, which were oddly unreferenced on the decal placement sheet for any of the versions.

I used a mix of Vallejo Model Air and Metal Color acrylics, Testors Model Master Acryl, and Tamiya acrylics. I added a few panels of Bare-Metal foil to break up the aluminum monotone. I am very pleased with the Vallejo Metal Colors, and will like do more natural metal finishes using this product. The fuselage band and wing chevron color does not match the insignia red paint specs in the instructions. I suggest painting the chevrons and the fuselage band with the same paint used for the tail surfaces and the nose. The completed model looks great to me, but I am a bit biased on the yellow wings USN schemes!

Eduard is releasing exterior and interior detail sets, and I hope they will also release a masking set for the expansive greenhouse canopy. Other vendors may release resin wheels, beaching gear, and so on. I am still hoping for a P-6 catapult!

This kit is an excellent value for the experienced builder and all of the preceding comments are not meant to be criticisms, but are a narrative of construction adventures. The choice of versions is superb, and Kitty Hawk’s overall treatment of a long-neglected subject is very welcome.

I recommend this kit! Thank you Kitty Hawk and the IPMS Reviewer Corps!

General comments during construction in the hangar

The front office or cockpit starts coming together in this step.