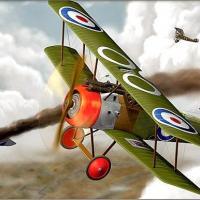 Many moons ago, long before Roden or Wingnuts, Hobbycraft made the first generally available, inexpensive plastic kit of a World War 1 aircraft in 1/32 scale. As an avid large scale aircraft enthusiast, I was thrilled to see the Sopwith Camel model hit the shelves and was delighted by the Nieuport 17 and Spad XIII that followed. Unfortunately, they didn’t pursue this line very far, ultimately releasing a Fokker Triplane that proved virtually unbuildable. Since then, of course, other companies have jumped on this bandwagon and done very well, although the prices asked have more often than not deterred me from adding their offerings to my collection.

While I was thrilled to see the initial release of the Hobbycraft Sopwith Camel, it was not without its flaws. It featured grossly exaggerated ribs on the wings and tail, oversized rigging loops as part of the struts, an oddly shaped tail skid, and for some reason, machine guns designed to be mounted upside down! Very strange. Nonetheless, it was the only product of its type on the market, and with a little TLC could be made into a very passable likeness of this spunky aircraft.

In the years that followed, Hobbycraft corrected the errors of this kit, releasing an entirely redesigned version with alternate engines. When Academy (which now owns the Hobbycraft molds) decided to jump into the ring with a limited-release centennial version of this aircraft, as well as the Nieuport 17, I assumed the Camel would be the later, refined version. I was mistaken.

What you get in this release is the initial, flawed version of the Sopwith Camel with some add-ons, including a little string for rigging, a superfluous photoetched control panel, a few other bits, and truly excellent decals depicting two especially colorful aircraft. In fact, it must be confessed, I liked the decals so much I decided to save them for a later build using one of the corrected kits.

Except for the upside-down guns, which were simply too much, I elected to build the kit essentially “as is” to give the reader an idea of what the kit looks like without extensive revision. The model builds surprisingly easily, with a good fit overall and very little filler needed. I didn’t bother with the photoetched bits because they didn’t seem to enhance the model appreciably. The only modification I made, besides turning the guns around, was to fill the holes on the struts with white glue after rigging to try and blend them in a bit. I know, I know, the rigging on the real aircraft didn’t run through the struts, but I was trying to work with the model as designed. Even so, and even with the heavy-handed ribbing on the wings and tail, the final product clearly looks like the venerable Sopwith Camel.

If you’re willing to put in a little extra effort to correct the errors on this kit, it will build into a quite acceptable example of this feisty little beast. The ribbing can be sanded down with a bit of patience, the open loops on the struts filled in, the tail skid fixed, and of course, the guns turned around the correct way. And the new decals should make this into a real eye-popper.

I recommend this kit with some reservations, although there’s nothing wrong that the average modeler can’t tackle.

My thanks to MRC and IPMS/USA for a chance to review this kit.