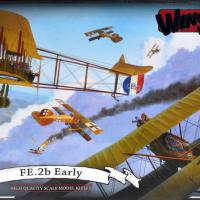 The “beast” is finished. I used two sizes of EZ Line for the structural and the control rigging. I did use monofilament, 0.007”, for the rigging on the tail booms. The booms support a lot of weight when the FE is up on its landing gear, so it needs actual rigging support. Monofilament is called for here. However, the EZ Line wasn’t so…EZ...

I felt the FE is large enough to support using the larger EZ Line for the inter-wing rigging, so I used that. The formula was, in keeping with a process illustrated on the Wingnut Wings site, drill out all of the rigging mounting holes so they are a little deeper, but not all the way through. With CA, glue one end of the rigging line into an anchor hole, then stretch it a bit to the other and dab some CA on the end and glue it into the other hole. All well and good. I attached the wing rigging EZ Line to the bottom of the upper wing before mounting it, then did the stretch, dab and glue into the corresponding mounting hole in the lower wing or nacelle. The issue is that EZ Line is very limp and flexible, and tends to curl up a bit on the end where you dab the CA. It is not so easy to stuff a limp, curled end of an elastic line into a teensy hole. And keep it there until it cures. I failed at using accelerator to speed up that process since I’m not that coordinated that I don’t need a third hand. After much tribulation and the assistance of some colorful incantations I learned in the Navy, I was able to get the wings rigged.

I was not sure how the tail booms were going to fit, being an integral part of the aircraft structure, but my fears were groundless. They attach very solidly at their ends and socket firmly into the wings. I did take the precaution of drilling holes in the bottom of the troughs where the ends of the booms fit to thread rigging through the wings.

The monofilament for the tail booms was easier, but hard to keep tight. Once I finished the tail booms, I felt I was almost home, but then there was the control line rigging, and there is a lot of that. The smaller diameter EZ Line came into good use here, but it’s even limper and more difficult to handle than the larger size.

The landing gear was no problem and the machine guns are very well detailed and easy to build. Now, it’s rigged and up on the wheels and done.

Even though this particular aircraft has much more rigging than I had realized, I enjoyed the build and certainly appreciate Wingnuts Wings’ attention to detail and fit, and the opportunity to experience it. If you like old and funky WWI airplanes and don’t mind a ton of rigging, this one is a classic.

Thanks very much to both Wingnut Wings for the kit and IPMS/USA for the opportunity to build and review it.