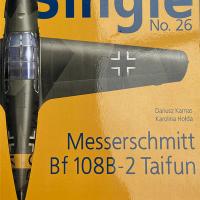 The Messerschmitt Bf 108 Taifun (English: “Typhoon") was a German single-engine sport and touring aircraft, developed by Bayerische Flugzeugwerke in the 1930s. The Bf 108 was of all-metal construction.

Originally designated the M 37, the aircraft was designed as a four-seat sports/recreation aircraft for competition in the 4th Challenge International de Tourisme (1934). The M 37 prototype flew first in spring 1934, powered by a 250 PS (247 hp, 184 kW) Hirth HM 8U 8.0-liter displacement, air-cooled inverted-V8 engine, which drove a three-blade propeller.

Although it was outperformed by several other aircraft in the competition, the M 37's overall performance marked it as a popular choice for record flights. Particular among these traits was its low fuel consumption rate, good handling, and superb takeoff and landing characteristics.

The Bf 108A first flew in 1934, followed by the Bf 108B in 1935. The Bf 108B used the substantially larger, 12.67-liter displacement Argus As 10 air-cooled inverted V8 engine. The nickname Taifun (German for "typhoon") was given to her own aircraft by Elly Beinhorn, a well-known German pilot, and was generally adopted.

This book is a compilation of 4-view color profiles, scale plans and photographic details of the Messerschmitt Bf 108B-2 Taifun, featuring scale plans in 1/72 and 1/48 scales plus drawings form wartime technical manuals and also photographs of the details in B+W and color The scale plans are exceptionally well done. I find the technical drawings, taken directly from the aircraft manual (Ersatzteil-Liste Me 108) to be fascinating.

One page even breaks the seats down to the frame and bolts. Two pages cover the cockpit and instrument panel with photos and technical drawings. Every dial and lever are numbered and listed. The four-view color profile is of a machine that saw service.

The photos are all ones I’ve not seen before, which I appreciate. Two color photos include the oldest airworthy Bf-108 in existence, W.Nr. (37)0114, built in 1937 & a rare, inflight color photo of Bf-108 D-IMTT. This was the personal aircraft of none other than Willy Messerschmitt himself.

While this 24-page volume is more a monograph than a “book”, it is full of drawings and photos that will be a valuable resource to the scale modeler. It goes into great detail without going into great detail, if that makes sense. It does. I can highly recommend this volume to the modeler and historian, alike.

Thank you to Casemate Publishing, and IPMS/USA for the review sample.