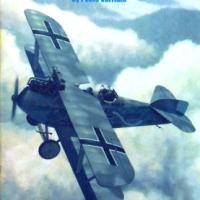 Windsock Datafiles from Albatros Productions rank high on the list of reference/historical publications by those who build WW I scale aircraft models. Each volume focuses on a specific aircraft and can be counted on to provide a thorough study of the subject. The most recent volume covers a subject that may not be well know to modelers who are not well versed on the subject of Axis aircraft that served in the “Great War.” Windsock Datafile No. 158 details the history of the Austro-Hungarian UFAG C.1…a two-seat aircraft that served in the dual rolls of aerial observation and ground attack. It was, in fact, one of the best of its kind in service during the final year of the war, and one that became popular with its aircrews.

Author Paolo Varriale proves that he knows the subject well, and his highly detailed and informed narrative is written in a way that makes this volume an enjoyable read. The text is supported by nearly 80 period photos – many published for the first time – with three rare color photos of preserved artifacts, and further enhanced by excellent 1:48 and 1:72 scale drawings by well-respected draftsman Marty Digmayer. Six detailed profiles by illustrator Ronny Bar provide the reader with a good sense of what the aircraft looked like in color, and a dramatic cover painting by Italian artist Roberto Zanella sets the stage for the interesting story presented in this volume.

The history of the UFAG C.1 begins early in the war and continues well into the years following the armistice. Ungarische Flugzeugwerke AG, which had been building Lohner designs under license, was contracted in 1916 to build 24 Brandenburg C.II(u) aircraft in its factory near Budapest. It was a logical arrangement because both Hansa-Brandenburg and UFAG were owned by the same industrialist. In 1917, an internal engineering team developed the UFAG C.1, adopting the deep, square fuselage of the Brandenburg C.II and powering the new aircraft with the 200 hp Hiero engine. Windsock Datafile No 158 covers in detail the development and operational use of the well-liked aircraft while providing insight into the fascinating workings of the Austro-Hungarian aircraft industry and the eventual collapse of the Austro-Hungarian Empire. It is a compelling story that this reviewer found to be both enlightening and informative.

But, this volume is much more than a historical study. Model builders will find adequate reference material in this issue to aid building an accurate replica of this somewhat obscure two-seater. In addition to the detailed scale drawings, there are numerous period photos that include close-ups of exterior details, photos and drawings of the Hiero powerplant, a diagram of the cockpit layout, and period photos of the cockpit and the Schwarzlose machine gun. The information found between the covers of Windsock Datafile No 158 will be a benefit to both scratchbuilders and those planning to build a UFAG C.1 from either a Sierra Scale or a Blue Rider kit.

Windsock Datafile No 158 is quite a complete package when it comes to covering the whole subject of the UFAG C.1. Obviously, it is highly recommended. My thanks to Albatros Productions and IPMS/USA for the opportunity to review this excellent publication.