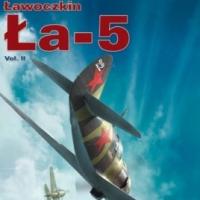 This is volume 2 of a series of publications providing the history of the development of the Lavochkin La-5 series of fighters used by the Soviets and their allies during World War II, or what they called the Great Patriotic War. The author goes into great detail describing the technological development of the type, and its engine, providing very intricate details of what went wrong during developmental testing, and how the problems were either ignored or solved. For a reviewer such as myself, this information is completely understandable, but for a non-pilot, it might be a little over complicated. One thing the author could have done for his English speaking readers would have been to provide speeds, dimensions, and weights in the English systems, pounds, miles per hour, and feet and inches, as well as the metric figures.

Not only does the author describe the technical development of the type, but he alludes to the previous types, material which is probably included in Volume 1. The aircraft actually began development as the LaGG-1, and only changed to LA-5 when a radial engine was installed. One interesting part of the narrative was the description of the comparison testing of the LA-5 with captured German FW-190’s and Bf-109’s. He describes the LA-5’s feature requiring the pilot to actuate six basic controls in order to throttle the engine back for landing, whereas the German types only required one control movement. He doesn’t really go into detail as to what these steps were, but I suppose the purpose of including this information was show the differences in engineering between the Russians and the Germans.

He does provide a number of actual copies of performance reports of these comparative tests, showing what actually was used to teach the pilots how to use their aircraft most effectively. He also describes the armament systems and the performance of the aircraft.

For the modeler, some valuable information is provided. Ten excellent color profiles are included at the back of the book, and these would be very useful to modelers, although some plan views would have been helpful in showing what the patterns of upper surface camouflage were like. The large number of black and white photos would provide some of this information, as well as view of foreign LA-5’s and captured examples. He even includes some photos of German aircraft when they were being compared with the LA-5. Of course, the LA-5 was passed on to Russian allies after the war, and photos of these aircraft are also included, although there is little actual color detail provided.

Aside from the above descriptions, the book provides more information on this aircraft type than I have seen anywhere else. The color drawings and black and white drawings and photos provide a wealth of information. Most of the information is of a technical nature, and you will need another source if you need information on the type’s operational career. But the black and white drawings are especially good, and I found the photos to be fascinating. Not having a copy of Vol. 1, I can’t say what information that issue provided, but I would presume that it gave the early operational career of the type. Possibly, it also included information on the kits available in the various scales. I know that the 1/72 scale kits I have by KP, Italeri, Heller, Revell and Frog all provide fairly accurate kits at reasonable prices, although the Burns Guide lists many more kits in various scales.

Having only seen the second volume of this work, I would certainly highly recommend it. I would assume that Vol. 1 would provide the rest of the story, and therefore, it is also probably worth getting as a modeling reference. I certainly appreciate receiving this review copy and would highly recommend it.

Thanks to Bill O’Malley and Phil Peterson of IPMS for the review copy, and thanks to Kagero and Casemate for the opportunity to review this fine publication.