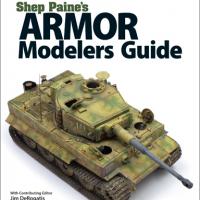 The Introduction is appropriately named ‘The Legacy of Shep Paine’ written by Jim DeRogatis. These four pages offer a wonderful view into the late Sheperd Paine’s life’s work and modeling history. Many of us older modelers first became aware of Sheperd’s work through his tip sheets that came with select Monogram kits of the 1970's then later with Tamiya kits during the 1980's. Shep was also an avid military historian and collector of military artifacts.

The book's contents are divided into two sections, 'The ‘Basics’ by Sheperd Paine and ‘Projects’ featuring eight projects by different modelers. The ‘Basics’ covers all the bases from the fundamentals in chapter one of ‘Assembling Armor Kits’ including a helpful ‘Parts of a Tank’ tutorial.

In chapter three, ‘Detailing and Advanced Modeling’ Shep shifts gears and goes all out with photo-etch, resin and good old fashioned scratch building.

In chapter four, ‘Battle Damage and Equipment’ Shep tells all. He covers what’s right and what’s wrong and how he makes it work with his own proven techniques.

Chapter five, ‘Painting and Decaling’ from the master himself. Lots of awesome tips and information come from here.

Chapter six ‘Weathering’ and seven ‘Planning a Diorama’ are Shep’s very useful and insightful uses of restraint, balance and symmetry. All laid out in layman terms.

‘Bases and Scenery’ are covered in chapter eight including techniques for modeling water.

‘Building and Structures’ is the focus of chapter nine.

Finally, we come to chapter ten ‘Posing and Painting Figures’, this is one of the most detailed chapters offered and includes a comprehensive step by step face painting tutorial.

This half offers insight into a wide range of applied techniques by eight renowned authors including Shepard Paine. Each captivating project is effectively presented and unique.

Shep Paine was a true pioneer in the modeling world and this book is a testament to his legend. Thanks to: Fine Scale Modeler, Kalmbach Publishing and IPMS for the opportunity to present this unique book.

Project 7: No Man Left Behind

Photo of Sheperd Paine
Previous Next