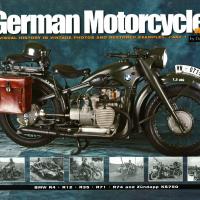 Ampersand’s latest book by David Doyle continues to expand on their Visual History format as this edition follows up on Doyle’s “Kübelwagen and Schwimmwagen: A Visual History of the German Army’s Multi-Purpose Vehicles”. Ampersand got their start in 1993 when Pat Stansell distributed a free issue of Military Miniatures in Review at the IPMS Nationals in Atlanta. Ampersand joined forces with HobbyLink Japan in 2008 and have continued to expand their military AFV publications ever since.

True to the Visual History Series name, the focus of this book in on the visual, detailing the development and service history of the German Army’s Motorcycles of WWII. This is slightly expanded from Ampersand’s standard 120 page version of their Visual History format and it runs 128 pages packed with large, clear photographs.

David Doyle starts with a one page introduction and then launches into the photographs, allowing the pictures (along with excellent captions) to tell the story. The ‘In Service” chapters are largely period photographs in black and white, followed by color photographs of restored vehicles.

The front cover photo is a nice color shot of a beautifully restored BMW R12. The rear cover features a group of Luftwaffe troops preparing to advance with their Zundapp KS750 motorcycles. I counted 253 well-captioned photographs, 219 in color. Ampersand has provided a short preview at: https://daviddoylebooks.com/blog/2016/7/29/german-motorcycles-coming-soon.

Motorcycles have been used as a war weapon since their invention, but the German military took their utility to new levels as Germany became the largest user of motorcycles in WWII. German motorcycle troops were actually an independent branch of service, being created in 1935 as the Kradschützen Truppe.

Utilized in coordination with the German infantry, they were used for scouting, tank hunting, and as rifle divisions throughout WWII.

This is a gorgeous soft-bound book and is well worth the money. David Doyle provides lots of clear photographs with the majority in color of restored machines.